We have a small flock of 30 breeding ewes, on a 24-acre holding on the edge of the Cotswolds. We have had three incidents resulting in injury to sheep where a dog has been loose. The first was when a lamb was killed in an orchard next to the lane. The second was an adult ewe in a field away from the road, having one ear virtually torn off and suffering bites to its front leg. The vet sewed the ear back on and treated the bites and the ewe recovered.

The most recent incident involved the senior of our two rams, who was attacked in the night in an orchard away from the road behind our garden. When I went to feed the sheep in the morning I first noticed a large area of churned up ground with a lot of blood and wool. The ram's face had been torn off down one side and his teeth and tongue and areas of bone were visible. We called the vet and had him destroyed. I tried to take a photograph but my hands were shaking so much I got the camera on video not stills. It still makes me sick to look at the film clip. We'd had him from a lamb and loved him dearly. The attack must have cost us upwards of £500 by the time you take in the cost of a replacement, vet fees and fallen stock charges, but I mind that less than the worry of how to keep our sheep safe and the thought of how long he suffered.

We have a footpath across a couple of our fields and we have had incidents where dogs have been found chasing sheep there. Dog owners often let them off the lead at the gate, so we get the hay crop trampled and contaminated with dog mess, and machinery damaged by sticks dropped by dogs. Even when we've caught dogs chasing sheep the owner will say that their dog wouldn't actually hurt the sheep and is only chasing them - I don't think they realise the damage this can do. 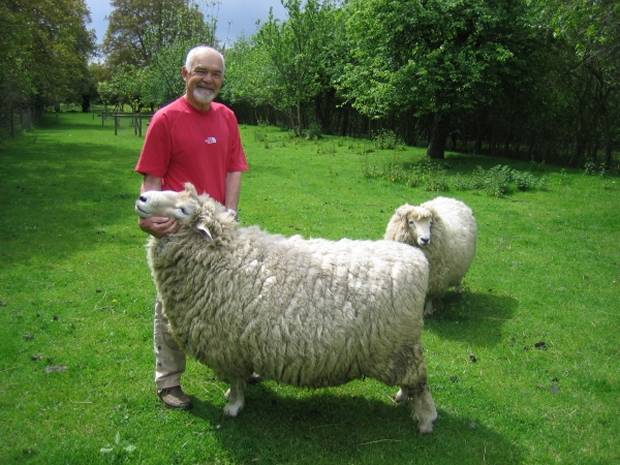 Arthur with his and Kate's two rams.
National Sheep Association | The Sheep Centre | Malvern | Worcestershire | WR13 6PH
Tel: 01684 892661 Fax: 01684 892663
NSA is a Company Limited by Guarantee, registered in England (No. 37818). It is a registered charity in England and Wales (No. 249255) and in Scotland (No. SCO42853). NSA is VAT registered (No. 273 3469 44). NSA complies fully with the General data protection Regulation (GDPR). Contact NSA to request our privacy policy, to raise queries or concerns regarding GDPR, or to unsubscribe from NSA mailing lists. National Sheep Association is an organisation which represents the views and interests of sheep producers throughout the UK. NSA is funded by its membership of sheep farmers and it activities involve it in every aspect of the sheep industry.
your business your future