My family and I are mixed beef, sheep and arable farmers. We have had problems with dog worrying in the past and lost several sheep over the years. One example was in the middle of the night when we had an attack on our rams, with four of them having their throats badly cut. Two of them died later in the summer. We had another attack in the middle of the night not long after. Again, two or three sheep had their throats ripped but were not killed, and one was killed outright. We had another fatal attack on some lambs and this time the dog was caught in the act. It belonged to a neighbour of ours who had been allowing it to roam. The police impounded the dog and eventually it had to be rehomed. 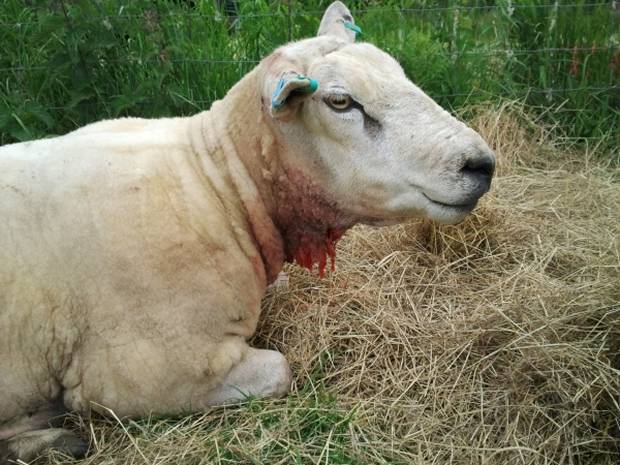 A ram with injuries to its throat.
National Sheep Association | The Sheep Centre | Malvern | Worcestershire | WR13 6PH
Tel: 01684 892661 Fax: 01684 892663
NSA is a Company Limited by Guarantee, registered in England (No. 37818). It is a registered charity in England and Wales (No. 249255) and in Scotland (No. SCO42853). NSA is VAT registered (No. 273 3469 44). NSA complies fully with the General data protection Regulation (GDPR). Contact NSA to request our privacy policy, to raise queries or concerns regarding GDPR, or to unsubscribe from NSA mailing lists. National Sheep Association is an organisation which represents the views and interests of sheep producers throughout the UK. NSA is funded by its membership of sheep farmers and it activities involve it in every aspect of the sheep industry.
your business your future