My husband and I run a flock of 350 commercial ewes on the Cotswolds. We got a call from a local person to say their dog had chased our sheep. Once they had got the dog away they tracked the sheep to see if they were alright and found one was injured. By then it was pitch dark and, although I managed to track her down in the lights of the Landover, she ran off and I wasn’t able to catch her. My husband gathered the flock in the morning and caught her, but it was obvious that her injuries were serious and she would need the vet. It was a Sunday, so by the time the vet saw her it was 18 hours after the attack. The owners had already offered to pay for any treatment and, although the ewe was in deep shock, she was coping well and so the vet decided that it was worth trying to save her. The sheep was called Evangeline.

She was sedated and I held her as the vet nurse clipped the wounds, cleaned them and put in local anaesthetic. The vet stitched and we stopped counting when we got to 22 wounds. She had deep bites to the armpits of all four legs and a deep bite in the back of the right thigh. There were multiple bites around her neck and throat, which the vet described as 'looking like a net curtain'. He wasn’t able to stitch them, as there were so many small holes. She had a piece of skin approximately six inches square torn off her right flank, but the worst injury was a de-gloving from half way along her back right down to her tail. This is where the skin is literally pulled off like a glove and left hanging, exposing the underlying tissue. The blood supply to much of it had already been lost and the vet stitched it back to protect the wound, but warned me that most of it would die off. I would need to flush the wounds daily, re-bandage the leg wound after three days, give daily antibiotics and pain relief and cut off the skin as it died back, so I could clean the wound underneath.

I took her home, put her in the hospital pen with a younger ewe for company and kept my fingers crossed that she didn’t die of shock in the night. The signs were good, as this tough little sheep actually started chewing the cud while the last few stitches were put in and the first thing she did when we got home was start picking at some hay. I can’t explain my relief when I went to check on her the following morning and she was up and about and waiting for some food.

That was the beginning of a very long haul. True to the vet’s prediction, most of the skin died off and she also developed cellulitis in the left leg, which swelled up and started to ooze serum. Eventually the skin split open and died off so she had no skin from mid hock to the top of her spine on the left side. At that point I took vet advice, as I was concerned for her welfare, but she was so well in herself that we decided to continue with the same wound care routine and see what happened, knowing that the real healing wouldn’t start until the skin had died back or reattached where it could.

We scanned the flock in mid-February and, as expected, she wasn’t carrying any lambs. She had consistently reared twins in previous years and I had no reason to expect her to be empty; she must have reabsorbed the lambs as she would have been about six weeks in lamb at the time of the attack.

Four months later, in the middle of April, the last of the dead skin came away and the bottom of the wound could finally start healing. Once it had sealed over a bit I was able to let her out of the hospital pen to join the rest of the flock in the shed at lambing time and, five months after the attack, she was able to go out into a paddock by day for some grass. The concern then was making sure she didn't get a fly infestation or sunburn, as it didn't look as though her wool would grow back.

My plan then was to see if she would get in lamb again in the autumn and, if not, let her stay with the flock anyway and have a retirement for as long as she was well and healthy. However, although her wounds healed, she died in the June. I believe the strain of recovering from her injuries finally took its toll, although she did enjoy a good quality of life and the summer grass for several weeks before she died.

The irony of this situation is that the owners of the dog are not 'faceless dog-walkers' but local people who we know well. They are not irresponsible or uncaring and are fully aware of the need to keep their dogs under control. Yet, despite us putting up signs, they got caught out because they didn’t realise that we often run the flock through several interconnecting fields and went through a gateway and came across the flock. We are reviewing how we can make signs more specific in the future. Meanwhile, they agreed to muzzle the dog and keep him on a lead at all times, which worked. But more recently somebody left their gate open and the dog got out and chased a lamb. They realised that they can have control of the dog but they can’t control the actions of other people and he has been rehomed.

Obviously the financial impact of this situation was softened by not having to pay the vet bill, which was around £600. I estimate that my time for intensive nursing and daily wound care has cost another £1,800, and then there is the loss of her lambs. She was a Badger Face Welsh Mountain cross Scotch Half-Bred and had been put to a Bluefaced Leicester ram in the hope of getting some ewe lambs as replacements, so it is impossible to put a figure on the value of the lambs she didn't have. At the very least we have lost the value of a crop of prime lambs. The stress, worry and distress to me as I have fretted over her wounds and how to manage them, wondered whether I am doing the right thing and been on the alert every time I hear a strange dog barking in the valley, is impossible to quantify. But the thing that upsets me the most is knowing that this brave, tough little sheep suffered as a result of a totally preventable situation. Evangeline 48 hours after the attack. The leg wound with the bandage removed 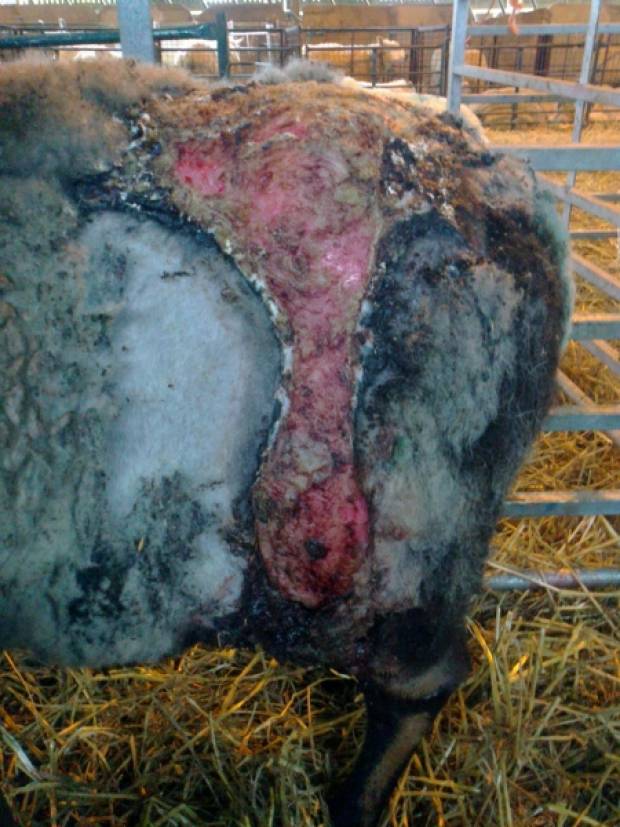 A photograph taken a few months after the attack.
National Sheep Association | The Sheep Centre | Malvern | Worcestershire | WR13 6PH
Tel: 01684 892661 Fax: 01684 892663
NSA is a Company Limited by Guarantee, registered in England (No. 37818). It is a registered charity in England and Wales (No. 249255) and in Scotland (No. SCO42853). NSA is VAT registered (No. 273 3469 44). NSA complies fully with the General data protection Regulation (GDPR). Contact NSA to request our privacy policy, to raise queries or concerns regarding GDPR, or to unsubscribe from NSA mailing lists. National Sheep Association is an organisation which represents the views and interests of sheep producers throughout the UK. NSA is funded by its membership of sheep farmers and it activities involve it in every aspect of the sheep industry.
your business your future