I have kept sheep for 30 odd years now, of all sorts, and I love them. The variety and different traits of so many breeds are amazing. Sadly, they are all susceptible to one thing - being killed or stressed by dogs.

When I was younger, having built up my own small flock, I decided to spend my 'sheep earned' money on some pedigree Ryeland sheep. My first born pedigree lamb was a stonking big ram lamb. He was also my first experience of dog carnage. He was killed by a dog that had jumped into the field over a stone wall. I can remember how upset I was, the frustration of losing him and the worry of it happening again. It put me off spending lots of money on pedigree animals when, no matter how well looked after they were, a dog in the field for a few minutes could cause so much damage.

I now farm with my husband on a hill farm. Miles of footpaths cross the lower slopes and the high ground is open access. Many a time we have witnessed from a distance, and unable to do anything about it, dogs chasing sheep. Over the past few years, and more so the past few months, tending a wounded or dying dog-gnawed sheep seems to be a regular thing for us.

More recently people are phoning and calling in at the farm to say they've witnessed sheep being chased by dogs. One lady walked over a mile down to the yard to say she had seen a dog attacking a sheep because she was so angered at what she had seen. The dog owner (who we never traced) had to kick and pull the dog off the sheep, and then left her for dead. The sheep was still alive when I found her but her head was crushed to bits and the blood was pouring from her eyes and nose. We had to destroy her. It was after this incident I decided to start to take photos.

This spring our sheep were attacked again. The luckiest sheep alive here today had part of its head crushed by a dog that had escaped. She was stitched back together, has lost an eye, has got rather a wonky head and has aborted her lamb, but she is alive. I had to stuff food in her mouth for a week and give her water from a bottle, before she decided if she was going to live or die. The dog was taken away by the dog warden and destroyed. He had chewed the ears off other ewes who were trying to protect their lambs.

On a lot of occassions people enter a field and let the dog off the lead. It then runs off out of sight, scatters sheep and isn't called back for another ten minutes. Unseen to the dog owner, damage may have been done. There may be a sheep on its back at the bottom of the field with its leg half eaten or belly ripped open, or a lamb with its neck broken, or an abortion in a pregnant sheep. Untreated, even a small dog bite can go very septic. Blowfly will attack in the summer and the sheep will start to be eaten alive with maggots. If you see your dog bite a sheep, even if the sheep runs off looking fine, you need to tell someone. Sheep are good at hiding pain, especially with a strange dog around, and under that wool there may be serious damage.

We have lately started to call the police and report cases we feel need following up. They have been very helpful. It does seem to drive the message home once an officer has had words with a dog owner.

It's hard to put a financial figure on dog worrying. Yes, we know the vet costs, but time costs us too. Nursing an animal for an hour a day for seven days takes up half a day’s work somewhere else. Sheep that abort may be carrying one or two lambs. Commercial hill lamb prices vary, but they can be worth around £60-£80 when ready for the butcher, so each ewe that aborts may be £160 lost. This cost is much greater with lowland ewes, and even more with pedigree sheep.

A dog is not playing when he starts to run after sheep, he is digging up his ancestral wolf roots, ready for the kill.

We always try to solve things amicably but ultimately the dog can be destroyed. We hate the idea of someone losing a pet. We are dog lovers ourselves and we couldn't shepherd without our own dogs. If you can't stop a dog chasing sheep, please take it to someone who can train it for you. And if you take your dog for a walk in the countryside please keep it an under control. Happy dog - happy ewe - happy me! 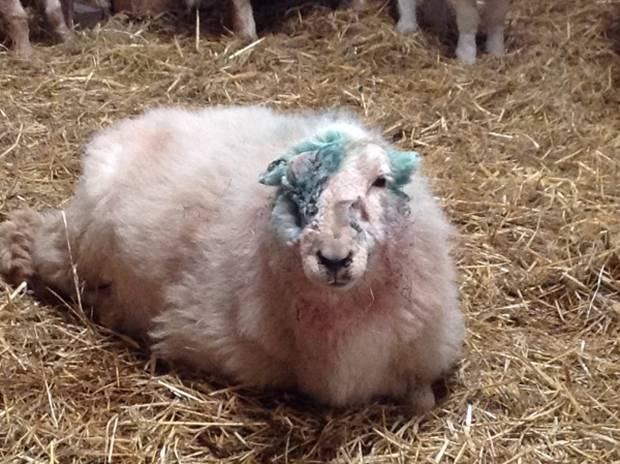 This sheep was saved following a dog attack, but was left with injuries to the head. 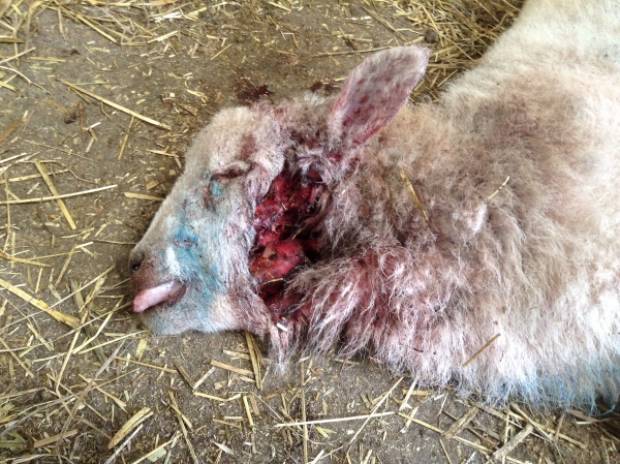 One of several lambs killed during a dog attack. The owner of the dog had it destroyed following the incident.
National Sheep Association | The Sheep Centre | Malvern | Worcestershire | WR13 6PH
Tel: 01684 892661 Fax: 01684 892663
NSA is a Company Limited by Guarantee, registered in England (No. 37818). It is a registered charity in England and Wales (No. 249255) and in Scotland (No. SCO42853). NSA is VAT registered (No. 273 3469 44). NSA complies fully with the General data protection Regulation (GDPR). Contact NSA to request our privacy policy, to raise queries or concerns regarding GDPR, or to unsubscribe from NSA mailing lists. National Sheep Association is an organisation which represents the views and interests of sheep producers throughout the UK. NSA is funded by its membership of sheep farmers and it activities involve it in every aspect of the sheep industry.
your business your future