The Annual Members Meeting for the Northern Region of the National Sheep Association (NSA) was held on Thursday 30th January at The Tynedale Suite, Hexham Auction Mart.  There was a strong turnout with 50 members in attendance.

The evening commenced with the AGM which saw Chairman Thomas Carrick report on a year of uncertainty in politics and weather.  Treasurer Ted Ogden reported on a stable year with the regions’ accounts which included a successful North Sheep event.

The formal proceeding continued with Thomas Carrick, Alston elected as Chairman, Matt Bagley of Newton Rigg elected as Vice Chairman and Ted Ogden, Skipton re-elected as Treasurer.  The English Committee continues to be represented by Eddie Eastham, Carlisle, Thomas Carrick with Greg Dalton, Bishop Auckland, stepping down.  Matt Bagley will now represent the region on this committee.  John Geldard, Kendal remains as the Trustee on the Board at NSA.

Carl Stephenson, Barnard Castle who had put forward the nomination, announced the winner of the TI Allinson Memorial Award as Mr James Porter, The Riddings, Reeth.  James has been breeding and showing sheep all his life.  He started off with hens and Shorthorn cattle with Swaledale sheep and then added North of England Mules and Blue Faced Leicesters to the mix.

He has worked tirelessly to promote the Northern Sheep Industry for many years, supplying stock for demonstration on NEMSA, Swaledale and Blue Faced Leicester display stands.  As a stalwart of Hawes Mart’s BFL and NEMSA sales he was often to be found widely promoting the breeds at every opportunity which has resulted in much deserved recognition countrywide.

Standing his ground with the belief that the breeds he had selected were right for the area, he has never, in over 40 years, deviated from breeding Swaledales, BFL and Mules to become one of the most consistent breeders of top quality genetics. His bloodlines have remained dominant within the breeds for this long period.

A quiet gentleman who has never been one for self-promotion and he has always let his stock speak for themselves.  He is held in high esteem by sheep breeders throughout the UK.

The evening then saw Chris Adamson, NSA Communications Officer give an overview of the on-going policy work by the National Sheep Association which includes BREXIT, Veganary and farming with the environment.  The evening was rounded off by 2019 NSA North Sheep Host, Richard Frankland entertaining with his experience of the behind the scenes both before and during this very successful event at Settle. 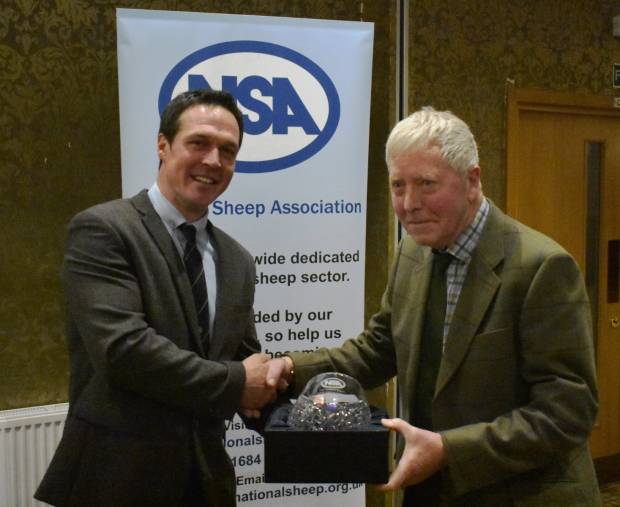 NSA Northern Region Chairman Thomas Carrick presents James Porter with his award
National Sheep Association | The Sheep Centre | Malvern | Worcestershire | WR13 6PH
Tel: 01684 892661 Fax: 01684 892663
NSA is a Company Limited by Guarantee, registered in England (No. 37818). It is a registered charity in England and Wales (No. 249255) and in Scotland (No. SCO42853). NSA is VAT registered (No. 273 3469 44). NSA complies fully with the General data protection Regulation (GDPR). Contact NSA to request our privacy policy, to raise queries or concerns regarding GDPR, or to unsubscribe from NSA mailing lists. National Sheep Association is an organisation which represents the views and interests of sheep producers throughout the UK. NSA is funded by its membership of sheep farmers and it activities involve it in every aspect of the sheep industry.
your business your future