Below is a full report on the Breakfast Club webinar. To watch the webinar, click here.

“Treat every enquiry as a potential sale” was a strong theme coming from the NSA Breakfast Club webinar on Wednesday 2nd February, underlining the continued and increasing international requests for UK sheep breeds across both well-known breeds but also for the lesser well known and the heritage breeds.

The early morning session, with Charles Sercombe (NSA Central Region Trustee) in the chair, a well-known sheep breeder running pure bred flocks himself, explored how to go about taking advantage of the changes in technology, utilising local contacts and national organisations, such as NSA, to promote the rich and diverse range of sheep breeds the UK has to offer.

Going into a little more detail on the processes and the documentation etc, Rob Grinnall, a qualified Vet, working for UKECP and UKTAG, portrayed their roles in not only representing the UK livestock industry overseas, but also in facilitation of the export procedures and regulations. He also took time to demonstrate how to make use of the APHA form finder to identify the relevant Export Health Certificate (EHC) required, together with the guidance available.

Representing the AI and ET sectors, Geraint Jones from AB Europe, gave an insightful overview into the workings of the company and similar organisations offering a range of assisted breeding and associated services for livestock. Highlighting some of the requirements from overseas breeders, such as figures, visual perspectives, as well as the price, he stressed how the actual volume of order often makes the difference between success and failure.

Also well known to NSA members, Edward Adamson, detailed to the audience how he started in selling sheep breeds and genetics. As a fresh-faced winner, a number of years ago, of the interbreed competition at the Balmoral show, and how the resultant photograph generated an enquiry – the rest, as they say, is history.

The subsequent debate served to demonstrate the support, guidance and experience available to help those with an interest and/or an opportunity to export breeding material, as well as the different requirements in terms of breeds for different countries. It also highlighted how new technology and social media has made it easier to promote to wider audiences in a timelier manner, but also emphasised how good pictures are even more important now, and how it is imperative for those promoting UK livestock industry overseas to be supplied with plentiful, well-taken photographs to accentuate the respective attributes of the variety of breeds available from UK breeders.

Rob is a veterinary surgeon who qualified in 1988, he has been in farm and equine practice, worked with Defra during FMD and farmed pedigree sheep and goats since 2000. In early 2018 I began work with Export Certification Limited, as a veterinary consultant and then took on work in promoting UK livestock overseas with UKECP and UKTAG.

Edward is a sheep and beef farmer farming in partnership with his son, Stewart on their own farm at Carrickfergus in Northern Ireland. Edward is actively involved in the sheep breeding world in the UK and has judged sheep throughout the UK and in France. In 1993 he exhibited The Interbreed Champion at RUAS, Balmoral Show which resulted in his first export sale of embryos to USA and since then has been involved in promoting and selling breeding stock for export to several countries. He has been recording his flock of Ile de France sheep with the Signet Sheepbreeder Scheme since 1988 and sees it as a means of improving performance right across the sheep sector and an important tool in efforts to increase the export of pedigree stock. A past Chairman of the Northern Ireland Region of the National Sheep Association (NSA) and now Northern Ireland Development Officer and manager. Was awarded a Fellowship of the Royal Agricultural Societies, (FRAgS) for his work on behalf of the Northern Ireland Sheep Industry. 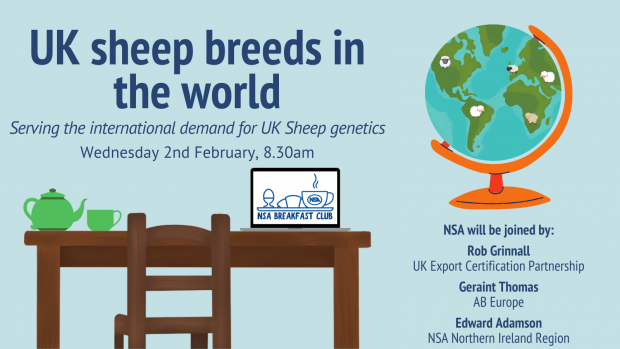