Rugby Farmers Mart welcomed members of the National Sheep Association to Stoneleigh Market on Friday (30th August) for their 11th Annual Ram Fair.  Entries for the sale were up by 40% to a catalogued entry of 162 rams from a variety of breeds and crossbreeds.  Prior to the sale the show for the Best pen of 3 Rams was ably judged by Johnny Metticola, shepherd to various producer of prime lambs.  He went about his task looking for the modern type of ram, used by himself and his clients.  His final line-up for the Championship saw Andrew Barnes’s Texels, Geoff Biddulph’s Charollais and J B & R L Cook’s Suffolks.  After some deliberation he gave the nod to the pen of Charollais which were awarded the Heygates Perpetual Trophy.

There was an excellent crowd of potential buyers at the ringside and spirited bidding for the tups on offer.  A very satisfactory clearance of 75% was achieved with an average price of 456 gns for a total of 116 tups sold.  Leading the way was regular NSA vendor, Barbara Smith from Slapton, Northants with her pen of Texel shearling rams.  Her top price was 660 gns with a further ram at 640 gns.  A first time vendor, James Theyer from Little Clanfield, Oxon had a strong pen of Texel shearlings forward and was rewarded with a top price of 630 gns.  Top of the crossbred tups forward was one from Mr C D Timm from Appleton Roebuck in Yorkshire, which sold for 650 gns.

Local breeder, Alan Thomas had a pen of 8 top Charollais shearlings of offer, which sold to a top of 600 gns and averaged £576.20.  The Champion Pen from Geoff Biddulph, Cheshire were sold late in the day but still achieved a top price of 590 gns and averaged £592.20.

Leading the trade for Suffolk rams was Messrs Cook from Napton, Warks who topped at 560 gns.

NSA would like to thank Heygates Country Feeds, J G Animal Health and AHDB, Signet Breeding Services for their generous support of the sale. 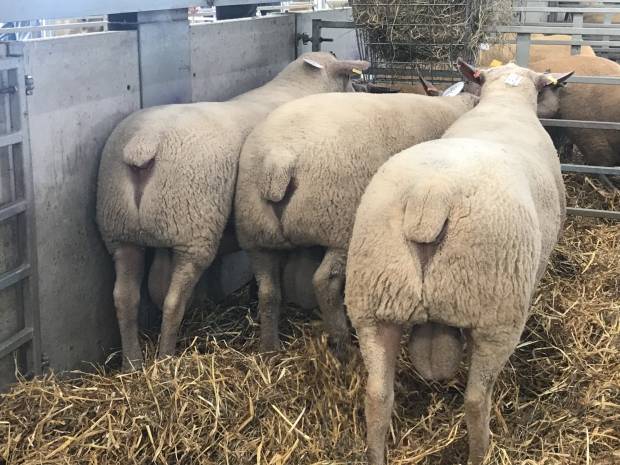