A version of Neighbourhood Watch schemes aimed specifically at farming communities, Farm Watch schemes are in widespread use by police forces across the country. Members of Farm Watch are provided with crime prevention advice and practical support and receive alerts of suspicious behaviour and criminal activity in the area. They are also encouraged to report any concerns about possible criminal activity to the police. Many Farm Watch schemes make good use of technology, using text messaging and email to send alerts to members quickly. Farm Watch schemes can be highly useful in tackling sheep worrying. It is often the case that farmers see a dog worrying their sheep, but are not able to catch the dog or identify its owners. In scenarios like these, Sussex Police sends out a description of the dog to try and identify a possible match.

Many forces have officers specifically mandated to deal with instances of sheep worrying. Some have responsibility for sheep worrying through their brief as Rural Crime Officers, while others have sheep worrying under their jurisdiction as Wildlife Crime Officers. Some forces have one or two Rural/Wildlife Crime Officers, while others have entire Rural or Wildlife Crime Teams, the size of which varies. The number of officers and value of resources assigned to rural/wildlife crime varies in proportion to the nature of the area and the level of rural/wildlife crime encountered. North Wales Police has a dedicated Rural Crime Team made up of a full time Sergeant and four full time Constables. The team gathers statistical information on all rural incidents 24 hours a day and follows up and deals with all enquiries of this type. Merseyside Police has one officer dedicated to dealing with breaches of wildlife law.

Where only one or two Rural/Wildlife Crime Officers exist, they can be used to support and advise other officers that may be sent to deal with incidents of sheep worrying. The Force Wildlife and Rural Crime Officer for Lincolnshire Police offers advice to officers and Police Community Support Officers who may have to handle reports of sheep worrying and provides training inputs to new recruits and PCSOs in relation to wildlife and rural crime issues.

Regardless of whether your force has special personnel handling rural or wildlife crime, it can also be useful to circulate information and advice regarding rural crime around your force, to keep officers up to date on current issues in rural crime. The North Wales Police Rural Crime Team have shared details of NSA’s communication on sheep worrying and sheep rustling in their monthly bulletin, which is distributed among the rest of the force.

If you are witnessing sheep worrying taking place you should call 999. If you have details of an event after it has taken place, call the non-emergency number, 101.

Reminding officers of powers with regard to sheep worrying

It is worth reminding officers who may have to deal with instances of sheep worrying of their responsibilities and powers with regard to incidents of this type. Where specialist personnel are responsible for handling all sheep worrying reports this may not be necessary, but it may be a useful reminder for any officers not specialising in rural crime who might be required to handle a sheep worrying report. Bedfordshire Police makes a point of reminding officers of their powers under Section 1 of the Dogs Act 1906 and the Protection of Livestock Act 1953.

Meeting with other forces in your region provides a good opportunity to compare experiences of sheep worrying and other rural crime and discuss approaches and ideas. Wildlife Officers from 14 forces in the North of England meet twice a year to discuss rural crime issues and initiatives. Every force north of Nottinghamshire is represented at these sessions.

Meeting with rural communities provides an opportunity for forces to improve relations with the public in more remote areas and create better communication and mutual information sharing.
West Mercia Police and the West Mercia Police and Crime Commissioner held a Rural Crime Conference for Herefordshire in May of this year. Local landowners and farmers and rural and agricultural organisations including the NSA were invited. Members of the West Mercia policing team gave presentations on aspects of rural crime before opening the floor for questions. There was much discussion of how to build better relationships between the public in the countryside and the police.

Essex PCC Nick Alston has launched a series of Rural Crime Forums, which landowners, farmers and rural business people are encouraged to attend. The PCC sees these as opportunities to establish the needs of the rural public and advise local people on best practice for crime prevention. At the next Essex Rural Crime Forum, Mr Alston intends to raise the issues addressed in NSA’s recent letter to police forces and PCCs about sheep worrying and sheep rustling and ascertain the impact of these crimes on communities in Essex. Hertfordshire Police runs what it calls ‘Barn meets’, where the police and public come together and have a dialogue about rural crime.

Gatherings and events such as Agricultural Shows provide a great opportunity to engage with members of the farming community. The Lincolnshire Force Wildlife and Rural Crime Officer attends a number of country shows each year. A representative from Nottinghamshire Police came to two NSA sheep events this summer.

Engaging with interested organisations and groups can be an effective way of improving dialogue with rural communities, increasing understanding on all sides and creating a coordinated approach to tackling rural crime such as sheep worrying. Hertfordshire Police hosts an Eastern Regional Rural Crime Forum, bringing police forces from the East and beyond together with other interested parties, including the Environment Agency, Trading Standards and the Country Land and Business Association. Hertfordshire Police also takes part in the Eastern Regional Wildlife Crime Network, Chaired by Natural England and the Partnership for Action Against Wildlife Crime.

There are various bodies and networks that police forces can get involved with across the UK.
North Wales Police has a more formal arrangement with Natural Resources Wales. Two officers from the Rural Crime Team are on attachment to Natural Resources Wales, enabling them to utilise its resources and exchange information and ideas. Some forces communicate with interested bodies and groups on a more casual and ad hoc basis, sometimes with regard to a particular case.

Hertfordshire Police deploys Scene of Crime Officers to sheep worrying incidents where the dog has not been caught. Saliva samples are taken from wounded sheep, and these can be matched against a suspected dog’s saliva. Descriptions of dogs can also be circulated by the police where an animal caught sheep worrying cannot be identified.

Treating sheep worrying as a crime

Sheep worrying is a crime like any other and it is important that it is treated as such. The owners and handlers of dogs that chase or attack sheep must be made aware of the serious consequences sheep worrying can have and be held accountable for their actions. There are several approaches to achieving this when resolving cases of sheep worrying.

Hertfordshire Police makes use of restorative justice when dealing with sheep worrying incidents. The officer handling the case will speak to the dog owner, establish the short and long-term costs of the attack to the sheep keeper by consulting a vet and agree compensation to be paid to the farmer with the dog owner. A contract for the future management of the dog may also be agreed. Some Rural/Wildlife Crime Officers and Teams work to prosecute sheep worrying offenders wherever possible, in recognition of sheep worrying’s status as a criminal offence.

28 PCCs and their forces are working together to tackle rural crime through the Rural Crime Network. The Network aims to develop relationships between the police and farming, countryside, wildlife and heritage organisations. It has received funding from the Police Innovation Fund to promote crime prevention initiatives and best practice and encourage direct interaction between businesses, organisations and the police. The Rural Crime Network includes PCCs and forces from across the UK.

The majority of the schemes and approaches listed above are also employed by police forces to tackle sheep rustling. Innovative initiatives to target sheep rustling are also being developed:

Dorset PCC Martin Underhill is working in partnership with Bournemouth University and the National Wildlife Crime Intelligence Unit to develop a tracking chip which could be implanted into one sheep in each flock as a means of combatting the theft of entire flocks of sheep. The project will also investigate the potential to DNA test rams in order to identify whole flocks through their small pools of paternal ancestors.

Dorset Police operates a 'Stop That Thief' scheme, in which farmers fit gates and doors with alarms that are triggered when a potential criminal approaches. The intention is to scare burglars off before they can begin a break in. The project has also been trialled in Herefordshire and is set to be rolled out across the county. 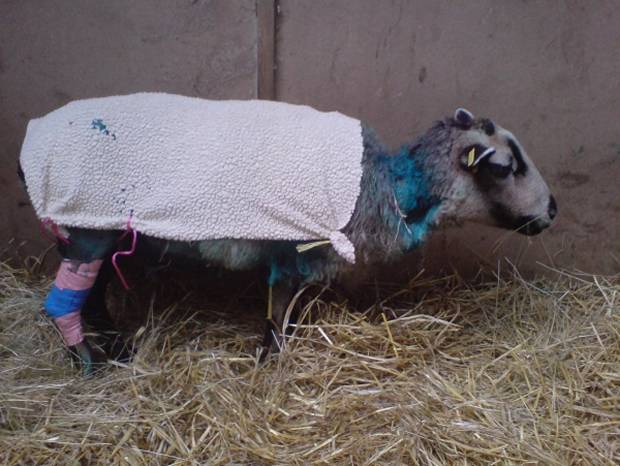