HRH The Prince of Wales’ outstanding contribution to the sheep sector was recognised today when the National Sheep Association (NSA) presented him with the George Hedley Memorial Award in a special ceremony at the Royal Welsh Show.

The NSA George Hedley Memorial Award is given annually to recognise an individual for their outstanding contribution to the sheep sector. HRH was announced as the 2012 recipient earlier this year and the NSA was delighted he was able to accept his award in such a public setting with so many people in attendance.

Presenting the award, NSA Chairman John Geldard said: “In its 52-year history the George Hedley Memorial Award has recognised a wealth of great people who have made incredible contributions to the industry, and it is a pleasure to add a member of the royal family to that list for the first time.

“ Over the last two decades The Prince of Wales has taken an enormous interest in farming, and sheep and the uplands in particular. He has great knowledge and an inspirational vision of agriculture and food production and has drawn attention both to the issue of food security and local supply chains. I have seen His Royal Highness with retailers on the edge of their seats as he gently encourages them to look at local food for the local economy, and make a real difference in some desperate times.

“The Prince of Wales is been directly and deeply involved in the Mutton Renaissance, Campaign for Wool and Cambrian Mountain Lamb, to mention just three projects that are directly related to the sheep industry. We are grateful for his influence and encouragement for our sector, and believe he is a very worthy recipient of this award.”

The winner of the George Hedley Memorial Award is voted for annually by NSA representatives, following nominations from a number of committees, organisations, breed and show societies involved in the sheep sector. Nominations for the 2013 award will be invited later this year.

Click here for our Facebook photo gallery with more photos of HRH and the George Hedley presentation. The Duke of Montrose (NSA President) presents the George Hedley Memorial Award to HRH The Prince of Wales. 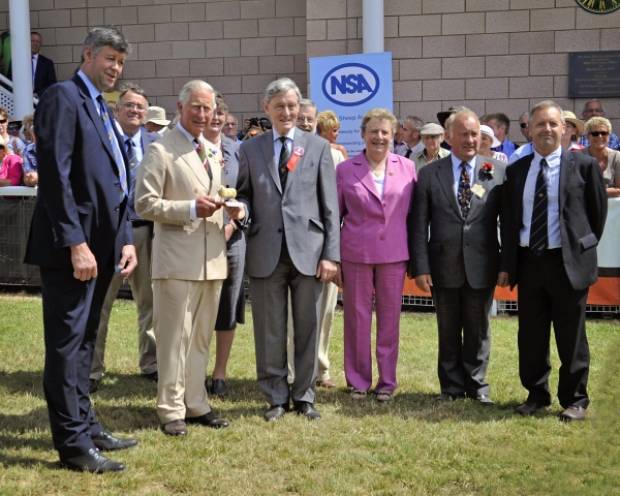 From left to right: John Geldard (NSA Chairman), HRH The Prince of Wales, The Duke of Montrose (NSA President), Margaret Dalton (NSA Trustee), Gwynne Davies (Royal Welsh Agricultural Society) and Phil Stocker (NSA Chief Executive).
National Sheep Association | The Sheep Centre | Malvern | Worcestershire | WR13 6PH
Tel: 01684 892661 Fax: 01684 892663
NSA is a Company Limited by Guarantee, registered in England (No. 37818). It is a registered charity in England and Wales (No. 249255) and in Scotland (No. SCO42853). NSA is VAT registered (No. 273 3469 44). NSA complies fully with the General data protection Regulation (GDPR). Contact NSA to request our privacy policy, to raise queries or concerns regarding GDPR, or to unsubscribe from NSA mailing lists. National Sheep Association is an organisation which represents the views and interests of sheep producers throughout the UK. NSA is funded by its membership of sheep farmers and it activities involve it in every aspect of the sheep industry.
your business your future