The 25th NSA South West Region Annual Sale held at Exeter Livestock Centre on 14th August was a day of mixed fortunes for vendors. Some breeds were difficult to sell, but for others it was a very successful day. All three rings had been raised and showed the sheep to advantage. Previous good weather followed by a shower on the morning meant that buyers could attend without worrying about what they weren’t doing at home.

Ring 1 was devoted to Texels and once again it was Robert and Rebecca Jordan who claimed top price of 1100gns. The 113 Shearlings averaged £473.  There were only a few females on offer and they sold well to a top of 500gns from Clinton Devon Farms for a shearling ewe. The overall Texel champion came from F.H. Chave & Son and sold for 940gns.

Ring 2 was a mix of breeds. There was limited interest for some breeds, but when it was time for the Suffolks the ringside filled with buyers determined to get the ram at the price they were happy to pay. Topping the Suffolk sale and creating a new sale record of 1,650gns was a shearling from Robin Irwin.  The 66 rams present averaged £581.

Ring 3 was led by the Beltex. Louise Moorhouse topped the shearlings with one selling for 550gns. The males averaged £363. Robert Darke and Judith Lapthorne sold their champion for 500gns. Several females met with strong demand and Mrs Gregory secured top price of 350gns for a shearling ewe.

Also in this ring were the Charollais. These again had a large crowd of buyers who were willing to pay for what they wanted. Robert Hopper received 1,000gns for a shearling ram that was also champion. Shearling rams averaged £516. It was a ram lamb from G.F. Burrough that received the top bid of 1,200gns. Females were in great demand and topped at 400gns for M.J. and M.J. Alford. 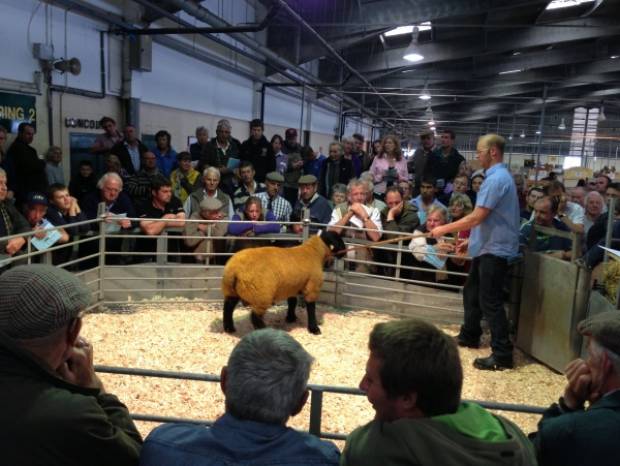 Top price, a new record, was 1,650gns for this Suffolk shearling ram from Robin Irwin.
National Sheep Association | The Sheep Centre | Malvern | Worcestershire | WR13 6PH
Tel: 01684 892661 Fax: 01684 892663
NSA is a Company Limited by Guarantee, registered in England (No. 37818). It is a registered charity in England and Wales (No. 249255) and in Scotland (No. SCO42853). NSA is VAT registered (No. 273 3469 44). NSA complies fully with the General data protection Regulation (GDPR). Contact NSA to request our privacy policy, to raise queries or concerns regarding GDPR, or to unsubscribe from NSA mailing lists. National Sheep Association is an organisation which represents the views and interests of sheep producers throughout the UK. NSA is funded by its membership of sheep farmers and it activities involve it in every aspect of the sheep industry.
your business your future