Warwickshire farmer Antony Spencer was ‘over the moon’ when he heard he was the first National Sheep Association (NSA) member to win a 3in1 Advantage Feeder in the organisation’s 2014 membership recruitment campaign.

NSA is giving away six of the feeders this year in a free prize draw for both new NSA members as well as existing members who encourage a friend or neighbour to join the association.

Mr Spencer filled in a membership form at the Lamma machinery show in January.  Mr Spencer says: “It was my first time visiting Lamma and, being an out-and-out stock person I had soon worked out from the programme where to make for to get away from the tractors for a bit. I found myself at the Advantage Feeders stand and was quite surprised to see NSA there too. I had been meaning to re-join for quite some time and am very glad to be a member of the NSA again. In this ever uncertain agricultural world it’s good to know UK sheep farmers have a voice – plus I’d forgotten what good bath-time reading Sheep Farmer magazine is! And I was absolutely over the moon to hear I was the lucky winner of the feeder as a result of joining up.

New members of NSA get automatically entered into the free prize draw, while existing members get one entry for every person they refer to NSA with no limit to the number of entries. The five remaining draws will be staggered through 2014 and people’s odds of winning increase the sooner they get their name in the hat, as all entries are eligible for each subsequent draw if they don’t win straight away. Full terms and conditions can be found at www.nationalsheep.org.uk/draw.

In the meantime, Mr Spencer is looking forward to putting his prize into action. “I’ve been looking at the 3in1 Feeder for some time now, especially after one of my neighbours has been so pleased with his,” he says. “I can’t wait to put this one to work, as I still have about 600 store lambs left on roots and will probably pull off some smaller ones to try the feeder on, particularly as you can restrict their intakes, making it possible to feed whole barley safely at a fraction of the price of pellets.”

Restricted intakes are a key feature of the 3in1 Feeder. It can be set for ewes or lambs to feed ad lib or, using a saliva restriction system, limit intakes to varying amounts. The restricted system requires stock to lick feed out of the groove between two adjusters, which can be moved into different positions to limit feed. Advantage Feeders says when the lick system is in the most restricted setting the stock lick for five to 10 minutes between periods of grazing. The licking period is limited because the livestock use the saliva from their tongue to get the feed out of the groove and the saliva decreases with progressive licks.

Mr Spencer is a fan of any kind of technology to make his life easier, be it the Advantage Feeder or automatic weighing and drafting systems. “My goal is to get up to 1,000 breeding ewes in the near future and I am always looking towards new equipment and technology to try and make the job easier,” he says. “My labour force consists of a collie, a kelpie, a huntaway and a very understanding fiancé (and six-month-old son!) when needed, so anything to make life simpler has got to be a winner. I am currently looking into auto weighing/drafting systems with EID readers, so I can record more personal data for each sheep and select the best performers. After all it costs as much to keep a bad ewe as a good one! I am a real fan of EID and decided when it first came in to try and make it work for me rather than moan about it, and to be honest the extra money spent on tags and my recording system has been more than justified by the improvement in performance in the flock.

“I have always had a lot to do with sheep, being born into a mixed farming family and starting out on my own when I was 20 with a small flock of pedigree Vendeen ewes. The sheep were never enough to make a living and most of my income was derived from contracting out to other farms. I still have quite a large jetting and dipping round and, with a couple of my neighbours, manage to shear 15,000 head a year. I have now managed to build my own sheep up to 500 breeders with about 350 of these as North Country Mule ewe lambs being sold each year as theaves or with lambs at foot. On top of these, this year I bought in an extra 700 store lambs to finish on stubble turnips that I rent from an estate that I lamb for. I am lucky enough to farm 75 acres belonging to my mother, which I use as a base for my farming activities, with the rest of my ground being spread far and wide in blocks ranging from five acres to 140 acres.” 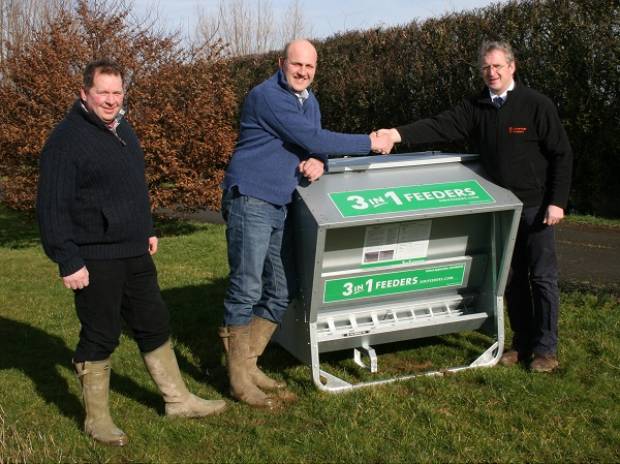 Antony Spencer (centre) accepts his prize from Robert Ball of Advantage Feeders (right) and Kevin Harrison, NSA Marches Region Chairman (left)
National Sheep Association | The Sheep Centre | Malvern | Worcestershire | WR13 6PH
Tel: 01684 892661 Fax: 01684 892663
NSA is a Company Limited by Guarantee, registered in England (No. 37818). It is a registered charity in England and Wales (No. 249255) and in Scotland (No. SCO42853). NSA is VAT registered (No. 273 3469 44). NSA complies fully with the General data protection Regulation (GDPR). Contact NSA to request our privacy policy, to raise queries or concerns regarding GDPR, or to unsubscribe from NSA mailing lists. National Sheep Association is an organisation which represents the views and interests of sheep producers throughout the UK. NSA is funded by its membership of sheep farmers and it activities involve it in every aspect of the sheep industry.
your business your future