Hampshire Down breeders Rob and Susan Small have been announced as the lucky winners of the first JFC footbath and hoof solution to be given away in this years National Sheep Association’s (NSA) membership prize giveaway.

Rob and Susan have farmed sheep near Ashburton, Devon since the 1980’s but decided to recently join NSA as the couple recognised the importance of membership in what are uncertain times for the sheep industry. Rob comments: “We thought it important as sheep breeders to join the NSA to keep up to date with legislation and new innovations affecting the sheep industry and also to make our views known to Government, with this being even more pertinent with the changes that may come as a result of our exit from the EU”.

Explaining their farming enterprise, Rob continues: “We started keeping sheep in 1984, like so many by buying some older in lamb ewes of various breeds to gain some experience. After a year or two we started breeding pedigree Poll Dorset’s to run along with a small herd of pedigree Hereford cattle and Ruby Red Devon’s. Then in 2009 we were impressed with the Hampshire Down sheep at the Royal Cornwall show and as a result now own a small flock of Pedigree Hampshire Downs which we enjoy showing at shows in South West England. In 2017 we were pleased to win the Hampshire Down small flock competition nationally so we think we must be doing something right at last!”

The prize of a JFC Footbath and 20 litres of hoof solution was won after Robert and Susan signed up for NSA membership. All new members joining the organisation as well as existing members who recommend a friend, neighbour or family member will be entered into the draw for a chance to win one of the remaining three sets of footbath and solution that will be given away throughout 2019. Full membership and prize draw details, including terms and conditions, can be found at www.nationalsheep.org.uk/membership.

Speaking of his win, Rob concludes: “We were so surprised to get the call telling us we had won but are very happy with the prize. The footbath will be very useful to help prevent foot problems, something we consider to be one of the biggest causes of loss of productivity in the sheep industry.” 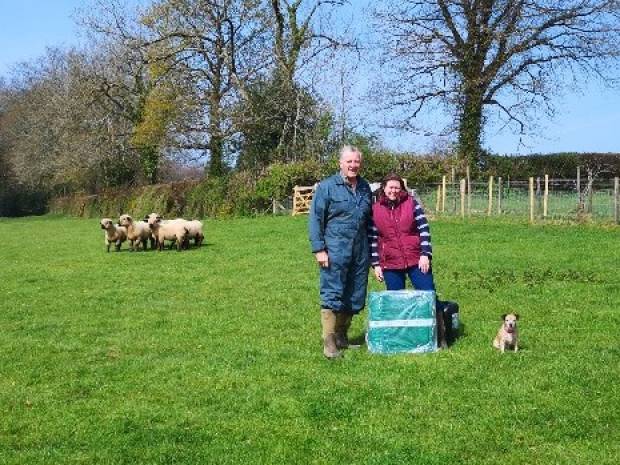