Having been announced as the deserving recipient of this year’s National Sheep Association (NSA) George Hedley Memorial Award earlier in the year, sheep consultant, Lesley Stubbings was presented with her award this weekend at the biennial Sheep Breeders Round Table (SBRT) conference, surrounded by friends and colleagues.

For approaching 40 years, Lesley has been a leading figure in the UK sheep sector, gaining a UK-wide reputation for her outstanding knowledge and expertise in all aspects of the industry and particularly sheep nutrition and parasite control. On winning the award, she joins many reputable faces honoured for their contribution to the UK sheep industry by NSA. The biennial conference that attracts leading names from the industry including farmers, vets and researchers was, therefore, the fitting occasion to present Lesley with the award.

Speaking at the ceremony, NSA Chief Executive Phil Stocker recognised the immeasurable value of the service Lesley has given to the UK sheep industry, particularly when considering her role in the formation and development of the SCOPS group. Phil comments: “I am sure all in attendance at Saturday evening’s meal that followed an interesting day of conference would be in agreement of how very deserving Lesley is of this award. Thanks to Lesley, I believe UK sheep farmers are currently far more aware of the challenges they face due to anthelmintic resistance and are taking steps to counteract this and improve the health and welfare status of their livestock. This alone is an achievement worth recognising, not to mention the vast amount of work throughout the sector that Lesley has been responsible for.”

On graduating from Nottingham University with a degree in animal production in 1979, Lesley joined ADAS and quickly worked her up to become Principal Sheep Consultant. She became an independent sheep consultant in 1997, developing a wide client base within the industry, advising farmers, Defra, organisations such as NSA and many more. In addition, she is a life member of the Sheep Veterinary Society and the leading figure in the SCOPS industry group, which is a world leader in integrated parasite control in sheep.

On receiving the award Lesley says: “To be recognised by my peers in the sheep industry in this way is a great honour. I have been very fortunate to have worked in such a vibrant sector over my career. In accepting this award I want to acknowledge the efforts of many people who have supported and encouraged me over the years and I hope to be able to continue to support the next generation of sheep advisers as we move into an new phase for our industry”.

Bryan Griffiths, NSA Chairman who also joined delegates at SBRT in congratulating Lesley says: “I was thrilled Lesley Stubbings was chosen as the recipient of the NSA George Hedley Memorial Award, in recognition of the dedication she has already given to the sheep industry and the role she will no doubt continue to play in the future. Anyone who has ever worked with Lesley cannot have failed to be impressed by her knowledge and enthusiasm for sheep farming, and we enjoy a particularly close working relationship with her at NSA. I believe this award to be very well deserved – congratulations to her.” 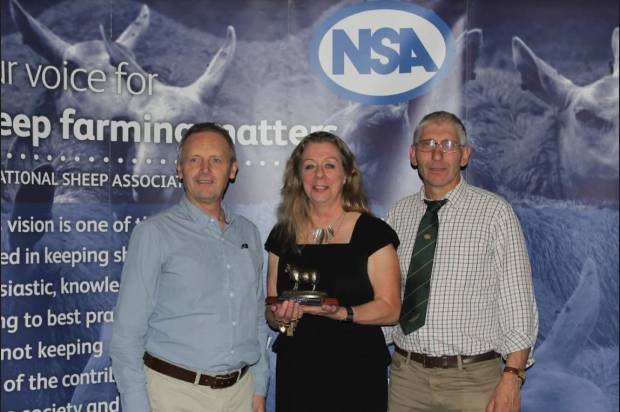 Sheep consultant, Lesley Stubbings with her award, presented by NSA Chief Executive, Phil Stocker and NSA Chairman Bryan Griffiths.
National Sheep Association | The Sheep Centre | Malvern | Worcestershire | WR13 6PH
Tel: 01684 892661 Fax: 01684 892663
NSA is a Company Limited by Guarantee, registered in England (No. 37818). It is a registered charity in England and Wales (No. 249255) and in Scotland (No. SCO42853). NSA is VAT registered (No. 273 3469 44). NSA complies fully with the General data protection Regulation (GDPR). Contact NSA to request our privacy policy, to raise queries or concerns regarding GDPR, or to unsubscribe from NSA mailing lists. National Sheep Association is an organisation which represents the views and interests of sheep producers throughout the UK. NSA is funded by its membership of sheep farmers and it activities involve it in every aspect of the sheep industry.
your business your future