Taking with them an exceptional set of shepherding skills, seven young competitors from England, Wales, Scotland and Northern Ireland will travel to the European ‘Ovinpiades’ Young Shepherd Competition in Paris next weekend.

Supported by the National Sheep Association (NSA) and AHDB Beef & Lamb, and sponsored by JG Animal Health, the UK competitors will be required to demonstrate sheep husbandry and industry knowledge in quizzes and practical tests, including use of electronic identification (EID), sheep movements and finished lamb assessments

The seven finalists all travel to Paris representing the UK after having qualified at NSA regional Next Generation Shepherd competitions over the last year and in addition to competing at Paris next week, most will also compete in the NSA National finals of the competition at the NSA Sheep Event this summer at the Three Counties Showground, Worcestershire.

Representing England in the European competition will be Sarah Dunn, 22 from Gloucestershire and Samuel Hewett, 23 from Kent. The Scottish competitors heading to France are Farquahar Renwick, 23 from Inverbroom in the Scottish Highlands and William Gray,23 from Ayrshire. From Wales, Tomos Glyn Davies, 19 from Denbighshire and Daniel Llyr Williams, 17 from Anglesey will compete having qualified at NSA Welsh Sheep last year, and finally travelling from Northern Ireland will be Matthew Robinson,19, from Ballycarry in County Antrim who qualified at NSA Sheep Northern Ireland in July 2019.

Scottish young shepherd Farquahar Renwick is a return competitor having represented the UK two years ago also. He comments: “I was delighted to be invited back to Paris to take part in the Young Shepherd's competition. Following being in Paris two years ago and running for Scotland in the young handlers section at the International Sheepdog Trials last year in Ireland, I was thrilled to take the opportunity to represent my country again. I’m looking forward to meeting new people in Paris and getting to see how people farm elsewhere. I’m sure everyone will be coming home inspired and with fresh ideas."

Phil Stocker, NSA Chief Executive, says: “All at NSA wish our enthusiastic and talented young shepherds the very best of luck in Paris. The NSA Next Generation programme is all about encouraging individuals such as these, and we are proud of the opportunity NSA Next Generation Shepherds’ Competitions offer at a regional, national, European and international level.”

All nine of the NSA’s regional sheep events or Next Generation training days run an NSA Next Generation Shepherds’ Competition. Two people qualify from each of these for the biennial UK final, and top placed competitors from England, Wales, Scotland and Northern Ireland are also selected for the European and International finals. France will once again host the European final as part of the Ovinpiades Young Shepherds Competition, which it runs for agricultural students aged 16 to 24 each February at the Paris International Agricultural Show.

Following their trip to Paris the group will then head to NSA Sheep Event on Tuesday 28th July where they will be joined by further competitors from other NSA English regions to compete for the title of NSA Next Generation Shepherd of the Year. 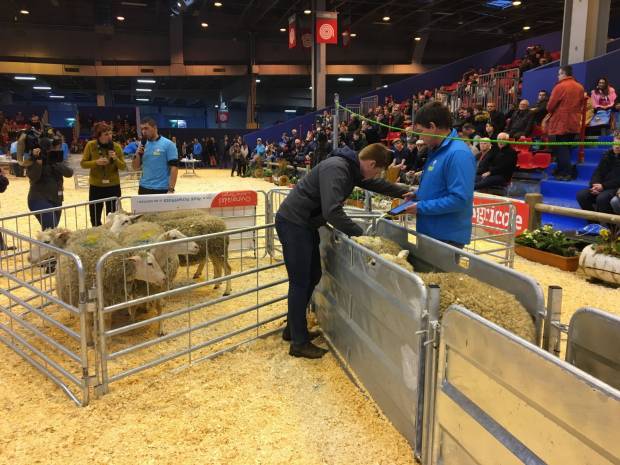