Comments made by Secretary of State for Environment, Food and Rural Affairs, George Eustice on BBC One’s Andrew Marr show this weekend have been met with both shock and anger by the National Sheep Association (NSA).

Mr Eustice was questioned on the subject of EU negotiations, Brexit trade deals and likely tariffs on Sunday morning’s show.

At a time when key decisions are being made on the future of British Agriculture it is extremely concerning to hear the lack of understanding shown by Mr Eustice who NSA believes, having spent five years as Farming Minister, should have better knowledge of the UK’s sheep farming enterprises.

NSA Chief Executive Phil Stocker comments: “Mr Eustice’s comments will have angered many of our nation’s sheep farmers, failing to identify the unique and varied nature of sheep enterprises across the country. To begin with, to suggest that many of our sheep farmers are mixed farmers is wrong. This assumption will enrage sheep farmers across the UK who have structured their farms to focus on sheep, and it will particularly antagonise our devolved nations where the landscape includes more remote areas of countryside, especially suited to sheep, and where buildings, machinery and farm infrastructure simply would not suit a sudden switch to cattle farming.

“The fact we have many sheep farmers, especially younger farmers and new entrants to the sector who run their sheep on arable farms and on short term grass lets was completely ignored – simply switching to cattle would be impossible for them.

“I find it hard to think that George Eustice really believes what he said, and this interview leaves us thinking his comments could either be part of creating a ‘we don’t care’ attitude to bolster trade negotiations, or, and this would be highly concerning, that it exposes an underlying willingness to see our sheep industry go through a restructure to reduce its size, scale and diversity.”

In the interview aired on Sunday morning the Secretary of State accepted that the sheep sector would be one of the hardest hit if a deal cannot be secured in the next few weeks. NSA therefore is increasingly concerned that of all negotiations on non-EU trade deals, those progressing at fastest pace are with New Zealand and Australia, deals offering no market opportunity for the sheep sector and deals that in fact pose the greatest risk to the UK’s sheep farmers.

NSA Chairman and North Devon sheep farmer Bryan Griffiths comments: “The firm prices UK sheep farmers have enjoyed this year have been driven by global demand for our product, supply has scarcely kept up with demand. Many people may not realise, although George Eustice definitely should, the UK is the third largest exporter of sheepmeat globally and at the same time some 65% of our production is sold on our home domestic market. The machinations of Brexit may bring about changes to exchange rates, global supply chains and price fluctuations, but demand will not simply evaporate, highlighting why a deal is so crucial. We have long-term production systems and are an industry that is resilient and used to uncertainty, but Mr Eustice's suggestion of a knee jerk switch to beef production is simply unrealistic.

NSA Scottish Region Chairman Jen Craig adds: “For a Minister to suggest on national television our mixed farmers could diversify into beef in the event of the lamb price crashing is quite frankly a laughable response. The industry has been calling for support packages to be put in place for compensation for the sheep sector in the event of a no deal. However, there continues to be a complete lack of clarity and guidance for our industry to plan for the next few months. If the UK government cannot reach a deal with the EU and if Mr Eustice believes we will be unaffected then I see absolutely no reason for the UK Government not to have a compensation scheme ready and waiting. The Scottish economy relies on the export of lamb. It has never been so important for our industry to be protected and maintained into the future in terms of food production, national importance, climate change targets and also the preservation of rural communities.”

Mr Stocker concludes: “Our sector is in a great place to benefit from a growing global demand for sheepmeat. The country’s sheep farmers work hard to supply a product that is predominantly ecological agriculture in nature, fed on grass and part of the creation of our iconic countryside. To allow British sheep farming to potentially be permanently damaged because the transition agreements to enable us to change to a different global supply chain aren’t put in place would be an act of negligence on behalf of our government.” 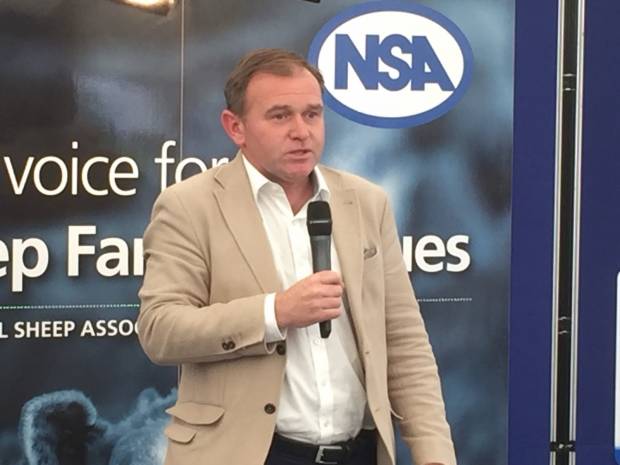 George Eustice, Secretary of State for Environment, Food and Rural Affairs
National Sheep Association | The Sheep Centre | Malvern | Worcestershire | WR13 6PH
Tel: 01684 892661 Fax: 01684 892663
NSA is a Company Limited by Guarantee, registered in England (No. 37818). It is a registered charity in England and Wales (No. 249255) and in Scotland (No. SCO42853). NSA is VAT registered (No. 273 3469 44). NSA complies fully with the General data protection Regulation (GDPR). Contact NSA to request our privacy policy, to raise queries or concerns regarding GDPR, or to unsubscribe from NSA mailing lists. National Sheep Association is an organisation which represents the views and interests of sheep producers throughout the UK. NSA is funded by its membership of sheep farmers and it activities involve it in every aspect of the sheep industry.
your business your future