The National Sheep Association (NSA) is pleased to announce sheep farmer Dan Phipps as its new Board of Trustees Chairman.

A sheep farmer from East Anglia, Mr Phipps was elected at the NSA Board Meeting yesterday (Thursday 21st January) and will commence a three year term in the role. He takes on the position from North Devon sheep farmer Bryan Griffiths, who has come to the end of his fixed three-year term.

Mr Phipps says: “I accept the honour of becoming NSA Chairman with immense pride. I am passionate about sheep, our industry and its role in the future of sustainable farming. I feel privileged to take over from Bryan Griffiths, who has done sterling work during a term of office that has seen some very challenging times.

“I was brought up on a sheep farm with awareness of NSA from a young age, as my father was a staunch supporter. I was encouraged to speak up at one of the first NSA meetings I attended as a young man and, despite the challenge of sharing my opinion in a room full of my peers, it taught me the value of doing so.

“This led me to get involved with various NSA committees and activities, including chairing the NSA UK Policy & Technical Committee for a number of years. I am currently Eastern Region Trustee and sit on the Board of Trustees, which appointed me as Chairman.”

Mr Phipps works as Flock Manager for the sheep enterprise at world-renowned horse-racing stud Godolphin in Newmarket, Suffolk, overseeing the management of the flock of just short of 2,000 ewes. He will be supported in his new role by the Board of Trustees, and also Mr Griffiths, who will continue as an active NSA officeholder.

NSA Chief Executive Phil Stocker comments: “As the chairmanship passes into the very reliable hands of Dan Phipps, it is only right to extend our sincere thanks to Bryan Griffiths for his devotion to this role over the past three years. Alongside wife Liz, Bryan has worked incredibly hard to represent NSA during three very uncertain years for the UK sheep sector. The challenges our sector has faced did not make for an easy ride, with an incredible amount of activity required of the NSA Chair at this time.”

Mr Phipps concludes: “As I take on this important role, I look forward to meeting a wide range of NSA members who put heart, soul and compassion into making the sheep industry an industry to be proud of.”

The NSA Board of Trustees is made up of 14 people democratically nominated by NSA members and appointed by Trustees. It is representative of the six NSA regions in England, as well as NSA Cymru/Wales Region, NSA Scottish Region and NSA Northern Ireland Region. Together the Trustees decide the strategic direction of NSA’s work to provide a voice for the UK sheep sector. 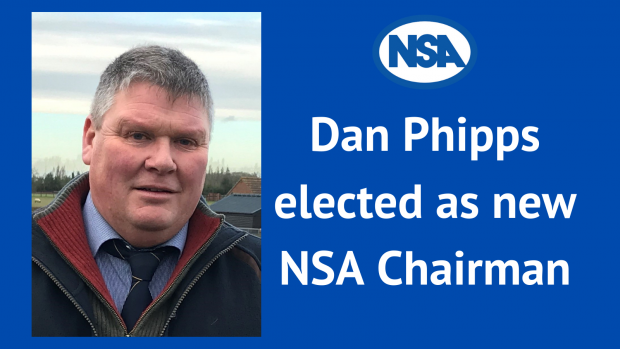