Lockdown has shown a marked increase in consumption of home-reared lamb, NSA Chief Executive Phil Stocker told the NSA Cymru/Wales ARMM. He said the conclusion was that, before lockdown, the catering trade had been using significant amounts of Australian lamb.

The virtually held meeting was well attended and generally upbeat. Mr Stocker said: “I think as we come out of Lockdown, it’s going to be one of the areas that we’re going to need to really focus on.

“We need to try to expose a bit of a spotlight on the catering and hospitality trade around traceability and try and encourage a greater level of transparency over some of their sourcing.”
He explained that figures for the past year suggested there had been a growth of 4% to 9% in lamb sales to the domestic market. And people clearly weren’t afraid to pay a bit more for a quality product, because the value of that lamb had increased by around 19%.

High Street butchers and farm shops reported trade had doubled or trebled, even quadrupled, with the vast majority of that meat being British. It wasn’t being sold on a ‘stack it high and sell it cheap’ basis. People were paying good money to treat themselves at home.

Phil Stocker added: “I think we’ve also got to do a bit more to make sure that some of the growth we’ve seen in those independent outlets is maintained as we go forward. The range and diversity we’ve got in our market place is of great value to us. We’ve got to work hard to maintain that.”

Brexit had been a real worry, but there was relief over the zero tariffs secured before Christmas. However, the non-tariff barriers, such as border control posts, export health certificates and bureaucracy, meant that access to European markets wasn’t as easy as it had been. Additional costs amounted to as much as £1400 per lorry.

Meanwhile, figures showed that opportunities were beginning to open up in other parts of the world, with the 96% of the 35% of lamb production that went to Europe reduced to 91%. He warned, though, that it would take a very long time to build such trade and wider exports wouldn’t replace the volumes going to the European Union.

Regional Chair, Kate Hovers, told the meeting that the proposed Government travel regulations were ill-thought out. She said the legislation didn’t seem to be the way to address core animal health issues and highlighted ‘the untold consequences’ and what she called the non-evidenced height and temperature restrictions.

Royal Welsh Agricultural Society Chief Executive Steve Hughson told the meeting that the events sector, which included the Royal Welsh Show and other Society events, was facing a 'Perfect Storm'. It was going to be a real struggle for the next 12 months, as they strived to protect the Society, its reputation and its finances for the next generation.

It was very challenging, with the reduction of Government support and the furlough scheme coming to an end, while rate relief and VAT rate relief were unlikely to go on forever. Then there was a Budget due on 3rd March, with possible implications for Welsh Government spending.
Mr Hughson said: “That Perfect Storm of reducing Government support at the same time as we’ve cancelled some events for this year means we have no income and of course we’re seeing greater requests for people asking for their money back.”

Across the major shows, there were reductions in membership, presenting quite a challenge. The Society had for some years tried to get across that membership is not about tickets, it’s about membership of the organisation, supporting it to deliver its charitable objectives.

Mr Hughson added that the RWAS is fully engaged with the Welsh Government through the Visitor Economy COVID Taskforce and the more recently formed Event Wales Industry Advisory Group.

The Basic Payment Scheme (BPS) and other EU agri-environment schemes will be replaced with a single direct support scheme for farming. It also aimed to reduce the complexity of regulation. A set of National Minimum Standards would make it easier for farmers to understand them and comply.

The problem of attracting and retaining young people in farming was addressed by South Australia’s Jamie Heinrich. He farms 880 hectares with his family and is a Nuffield Scholar and a former Youth Ambassador for the Sheep Meat Council of Australia,

Farming had a bright future, but needed the right young people, he told the meeting. Attracting and retaining them involved a good education, the right career structure and less negativity on the part of the current generation of farmers. There was a big difference between what farmers said about the industry and how they actually felt – most loved the lifestyle and the rewards and challenges of their industry. 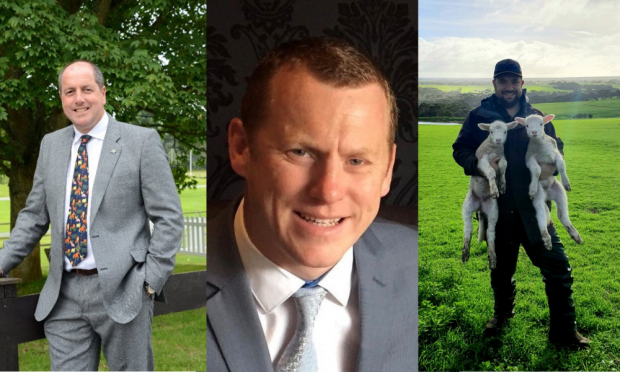 Speakers Steve Hughson (left), James Owen (middle) and Jamie Heinrich (right).
National Sheep Association | The Sheep Centre | Malvern | Worcestershire | WR13 6PH
Tel: 01684 892661 Fax: 01684 892663
NSA is a Company Limited by Guarantee, registered in England (No. 37818). It is a registered charity in England and Wales (No. 249255) and in Scotland (No. SCO42853). NSA is VAT registered (No. 273 3469 44). NSA complies fully with the General data protection Regulation (GDPR). Contact NSA to request our privacy policy, to raise queries or concerns regarding GDPR, or to unsubscribe from NSA mailing lists. National Sheep Association is an organisation which represents the views and interests of sheep producers throughout the UK. NSA is funded by its membership of sheep farmers and it activities involve it in every aspect of the sheep industry.
your business your future