As the global politicians and state leaders prepare to travel to Glasgow for this November’s COP26 conference discussing the worldwide climate emergency, NSA is working hard to raise awareness of the positive role UK sheep farming can have on the issue.

As a finger of blame may once again be pointed to livestock production as a key contributor to climate change NSA is explaining that the UK’s methods of sheep production are in complete contrast to some methods of intensive farming found in other parts of the world. The Association is therefore aiming to improve understanding amongst the wider public of the importance of the UK sheep sector and demonstrating that a more holistic approach to sustainability is required if we are to meet environment, economic and social goals.

NSA is encouraging policymakers not to think of climate change or nature recovery in isolation, but to consider these things in tandem with the protection of natural resources, heritage, rural economies, the health and wellbeing of people, and sustainable and local food production and consumption.

We spoke to five NSA members from across the UK who explain how their farming systems work with the environment and communities around them.

“For the past twenty years we have worked towards moving our mixed, organic system towards one that is also a haven for plant and wildlife.

“Through implementing a six year rotation on our 1600 acre (650 hectares) farm and a further 2000 acres (850 hectares) we manage for like mined farmers in the area we have built fertility and improved diversity on farm. The reintroduction of sheep into the arable system has been an important part of this.

“We now run our flock of New Zealand Romney sheep as part of the rotation. Two year leys are used around the farm to build fertility for the next four years – Winter cereals are followed by spring cereals, followed by a legume, and a second legume with spring cereals undersown. These are used for grazing the sheep.

“We have found the diverse leys have improved soil health, doubling the soil organic matter and have allowed for fantastic performance from our sheep flock. The flowering legumes are also great for pollinators and ground nesting birds. We have so much diverse insect and bird life including a large population of Skylarks.

“Being an organic system we are confident that water sources around our farm are clean, with no chemicals used. Sheep graze outside year round so we are never left with bedding or muck to dispose of.

“We are proud that our holistic, low input system is carbon negative and have used various tools and surveys to assess this. Currently we sequest seven tonnes of carbon per hectare per year. A loss and ignition test as part of a farm carbon cutting toolkit looks at soil matter to assess this on farm.

“As a method of measuring biodiversity on farm we also take part in wildlife surveys with the Suffolk Wildlife Trust. Results from these have shown that both plant and wildlife numbers are increasing with several notable species having been found on the farm that were missing from farms in the area previously.

“Our system may produce slightly lowered yields but we rely on very little input to the farm meaning we are very sustainable. As far as holistic systems go, we have built a very good one.

“But sustainability is not only about carbon sequestration and climate change, we believe it is about the local community also.

“In an effort to educate our local community and the wider public the farm hosts numerous farm walks including 25 – 30 school visits a year. We also run our own YouTube channel so give regular updates and round ups of what is happening on the farm. In addition to education we also support our local community by letting buildings on a disused airfield on part of the farm to local businesses at preferential rates.

“We have now had twenty years as an organic system and have progressed a long way in this time but we recognise there is still much to do but it is not all about organics – Building natural fertility is they key aim however the system approaches it – events such as Groundswell are helping to teach that there are biological method available to farmers, not just chemical to improve production.

“It is an exciting time. We expect to engage fully with ELMS and the Nature Recovery scheme. The farm is committed to planting hedges and 50 acres of agroforestry offering our sheep flock shade and browse to feed from. There is definitely a move to work as regenerative farmers in the UK using improved sheep breeds and grazing techniques and with many of the next generation of sheep farmers embracing these ideas the sector has as strong message to share with key decision makes when it comes to the future of sheep farming in the UK." 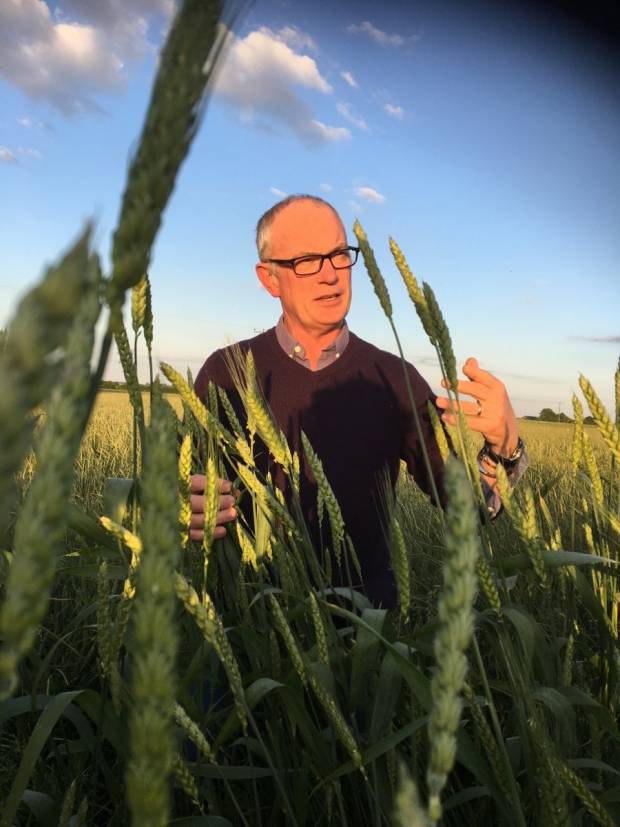