Meet the 2014 NSA Next Generation Ambassadors

The inaugural group of NSA Next Generation Ambassadors saw 11 young people from around the UK selected for the programme. You can read about them here and also follow the link to more information in our Profiles area.

The Ambassadors enjoyed five delivery sessions through the year, which were generously supported by the following companies and individuals. NSA is indebted to them all. 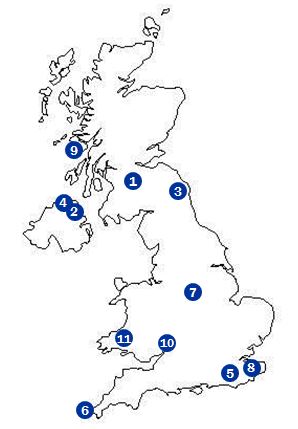 You can see where each of the 2014 Ambassadors is based in the UK by finding their number on the map.

1. Jennifer Craig, 24: Jennifer runs the family farm at Biggar, Lanarkshire, with her father, and has a real passion for the sheep they run on the 710ha (1,750-acre unit) upland unit. She is highly ambitious, wanting to improve performance within the flocks of 800 Blackface ewes and 200 commercials and start selling pedigree ram lambs and shearlings bred from her personal flock of 25 pedigree Charollais ewes within the coming five years. She also wants to reintroduce cattle onto their hill land, to create an integrated and mutually beneficial beef and sheep enterprise. Read more from Jen here.

2. James Davison, 20: James has shown huge determination to get into sheep farming, taking on land at Ballymena, County Antrim, that his father started renting out nearly a decade ago when he exited the dairy sector. He has built up a commercial flock of 150 ewes in just four years from a base of Blackface cast ewes, with a firm focus on selecting for maternal traits, and would like to keep growing the flock to 600-800 ewes in order to be able to move into full-time employment in the sheep sector, leaving his job on a local dairy farm behind. Read more from James here.

3. James Drummond, 30: James runs the sheep enterprise on his family’s mixed farm at Alnwick, Northumberland, and has already implemented several changes within the 1,250-ewe flock including EID for performance recording and more vigorous selection for worm and footrot resistance. The focus in on production of finished lambs for the market but with an appreciation that the performance of the Suffolk cross ewes is just as important as the terminal sires used. James is a Nuffield Scholar and also plans to establish a monitor farm in the near future. Read more from James here.

4. Thomas Gibson, 27: Genetics and grassland management are the two priorities for Thomas, who works alongside his father on their mixed livestock farm at Broughshane, Ballymena. He has already introduced some hybrid breeds into their flock of 800 hill ewes to improve maternal lines, is using AI on his best Blackface ewes and has drawn up a reseeding plan for the whole farm. Thomas wants to reduce concentrate use and maximise kilos of lamb produced, knowing farmers cannot control lamb prices but can improve quality and quantity of lambs finished. Read more from Thomas here.

5. James Hamilton, 25: James has been shortlisted for three FBTs in recent years and, despite not being successful yet, is determined to secure one in the future. In the meantime he is far from resting on his laurels, continuing to build up the ewe flock he started from scratch three years ago and working as a contract shepherd. With a flock of 120 ewes on his parents 28ha (70-acre farm) in Hadlow Down, East Sussex, shearing 4,000 sheep each summer and shepherding 500 ewes owned by two landowners, James is definitely a busy man. Read more from James here.

6. Sara Jones-Richards, 25: As a final year vet student, Sara is looking forward to finishing her exams this summer and taking a job in a mixed vet practice near her home in Penzance, Cornwall, while also working alongside her partner Hugh running a flock of 60 milking ewes for Greek yoghurt production and 25 pedigree Poll Dorsets for meat production. Sara plans to increase to 500-700 Dorsets over the next five years and up to 2,000 after that, making economies of scale by taking advantage of available rented land in the area. Read more from Sara here.

7. John Kirkpatrick, 33: From his home in Northern Ireland to a rented unit in the Highlands to a small owned farm in Mercaston, Derbyshire, John Kirkpatrick has seen his love of sheep farming take him all over the UK. It has also seen him develop a passion for wool-shedding sheep and he now has a flock of just over 100 hybrid Easycare, Wiltshire Horn and Texel ewes (called ‘Easex’), all naturally wool shedding and producing Beltex cross lambs for a boxed lamb scheme. John also works in the poultry industry, regularly travelling to the Middle East on consultancy jobs. Read more from John here. 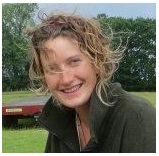 8. Marie Prebble, 25: Marie works alongside her father on a tenanted farm at Dover, Kent, where she is focused on developing a detailed business plan, improving attention to detail in her accounts, working to an in-depth sheep health plan and securing business and financial mentoring to ensure her farming business is sustainable and profitable for the years to come. During that time she also plans to increase her 250-ewe flock to 400-500 by taking on additional rented grazing and improving her own permanent pasture by reseeding and soil management. Read more from Marie here.

9. Andrew Prentice, 31: Andrewrecently moved to the island of Iona with his wife and two children, taking on a 95ha (230-acre) farm because he saw more opportunity to expand his sheep enterprise on the west coast of Scotland that where he was in Aberdeenshire. His immediate focus is building up his flock of Blackface ewes, with the potential to take on more land on the island and/or nearby Mull in the future. In the meantime achieving top prices at Dalmally Market and top prizes at the Royal Highland Show are key targets. Read more from Andrew here.

10. Kate Robinson, 23: Kate is employed as a shepherd at Mitcheldean, in the Forest of Dean, Gloucestershire, working with a closed flock of 1,000 breeding females (a mix of pure Charollais, pure Lleyn and commercial ewes) and finishing 1,700 store lambs per year. She has developed a very good understanding of using EID and computer hardware/software to aid performance recording and takes a lead on this with the pedigree ewes, with the intention of extending it to the commercials too and using it to make key stock selection decisions. Read more from Kate here.

11. Rhydian Thomas, 24: With 600 Beulah Speckled Face ewes on his family farm at Llandeilo, Carmarthenshire, 950 Suffolk Mules on the farm where he works and a shearing round in the summer, Rhydian is never far away from sheep. He is actively looking for land to rent near the home farm and, knowing that would likely be hill ground, would run more Beulahs to produce pure-bred and Mule breeding females. He would employ a vigorous New Zealand-style selection programme for his stock, seeing best use of grass and using good genetics at the future. Read more from Rhydian here.