A highest price of 7,000 guineas and averages well above expectations were the headline figures on a successful day at the NSA Wales & Border Main Ram Sale at the Royal Welsh Showground in Builth Wells. Vendors and buyers were in good form and the mood was upbeat, with an overall 4.5% increase in average prices, despite previous concerns over the current political situation.

Chairman Richard Gwilliam was frank: “It’s been a great relief! There has been a very strong trade, particularly on the Suffolks. There was so much competition and the confidence to buy them was colossal today.

“We thought they were going out of fashion but they seemed to do the best trade of the day. There were a lot of people about and an enormous amount of confidence, which is rather surprising. Across the board, trade has been very strong and people are very, very happy.”

The highest priced Lleyn from Derek Steen sold for 3,800 guineas and breed averages were up £41 at £439. The top price Charollais shearling was a 3,200 guinea shearling ram sold by Jonathan Wales to David Roberts.

The highest priced ram was sold by Chris Armstrong who, for the first time, had a Hexham and Northern Marts ring selling Texels. The shearling ram bred by Jonathan Watson of Berwick on Tweed was the ring champion and sold to Eifion Morgan, Morgan Family Blaencar Farm, Sennybridge, for 7,000 guineas.

Chris was thrilled, especially as Mr Watson had been a driving force behind the decision to sell at Builth. A number of consignors had sold sheep well into the thousands, at two and a half and four thousand guineas.

Jonathan Watson brought 22 shearling rams and had saved the 7,000 guinea ram for Builth. The tup’s grandmother had produced four registered sons working in pedigree flocks. The sire, Midlock You Are The One, was bought by the family for £23,000. He in turn sired the ram they sold at Kelso for £8,500 the week before the Builth sale.

The Texel Society Champion, a shearling ram from Gregor and Bruce Ingram’s Logie Durno flock, sold for 6,000 guineas and was bought by JM & SM Priestley, of Brampton, Cumbria. A shearling ram was sold for 5,000 guineas by the Reed family, Pembrokeshire.

The highest priced Suffolk was bred by Lorna Jane Campbell, who was delighted with the day’s trading. She bought the Nesbit sire for £2,600 at Kelos for her Cwrt Malle flock.  The mother is a Glenrath ewe. 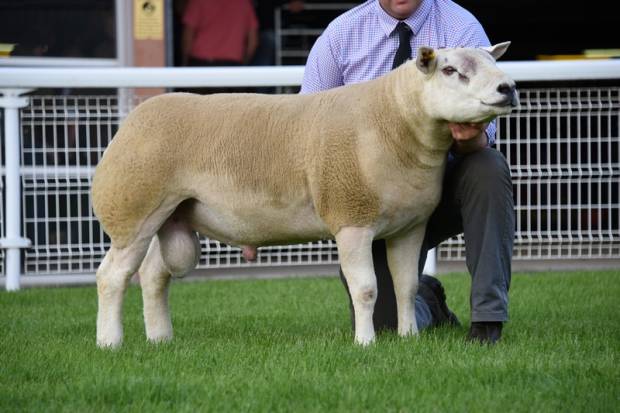 The 7000 guinea ram from Messrs Watson Lot 3527
NSA Wales and Border Ram Sales | Mrs Jane Smith | Long Wood Farm | Trostrey | Usk | NP15 1LA
Tel: 01291 673939 Email: [email protected]
NSA is a Company Limited by Guarantee, registered in England (No. 37818). It is a registered charity in England and Wales (No. 249255) and in Scotland (No. SCO42853). NSA is VAT registered (No. 273 3469 44). NSA complies fully with the General data protection Regulation (GDPR). Contact NSA to request our privacy policy, to raise queries or concerns regarding GDPR, or to unsubscribe from NSA mailing lists. National Sheep Association is an organisation which represents the views and interests of sheep producers throughout the UK. NSA is funded by its membership of sheep farmers and it activities involve it in every aspect of the sheep industry.
your business your future