The Dutch Spotted to make their Builth debut

A new but increasingly popular breed of sheep, the Dutch Spotted, will be offered for sale at the NSA Wales & Border Main Ram Sale on 20th September this year. The society has chosen the sale at the Royal Welsh Showground to give commercial sheep producers from a wider area the opportunity to buy.

The vice chairman of Dutch Spotted Sheep UK, Ali Jackson, said: “The breed is expanding massively. We just felt that the Builth sale is held in a large commercial sheep area. In the last two years the breed has just expanded massively and everybody wants them.

“Our objective is to target commercial farmers, so Builth was an obvious choice. There has been a lot of interest in Wales and we have a lot of new members there.

“There is a lot of interest in the south, so geographically it’s a very good area.”

The sale will be open to aged rams, shearling rams and ram lambs, as well as aged ewes, shearling ewes, ewe lambs and graded females. There will pens for MV and Non MV accredited flocks. Entry forms and schedules will be available from NSA Wales and Border Ram Sales.

The breed was first imported from the Netherlands five years ago and the society says there has been unprecedented demand within the last 12 to 18 months. The NSA Wales & Border main ram sale has been chosen to showcase the breed this year, because it’s a multi-breed sale and attracts commercial producers.

The strikingly pretty sheep are said to produce a quality meat carcase on a grass based system. They have a large framework, but being light boned are good to be used on hogs. Other attributes include a high killing out percentage, with lean tasty meat, easy lambing and milky ewes.

NSA Wales & Border Ram Sales Executive Director, Jane Smith, is delighted to welcome the breed to the multi-breed sale. She said the sheep already attracted attention at the Royal Welsh Show a few years ago.

And she added: “ Over my tenure of the Ram Sale we have seen several breeds join the sale and with the ever growing popularity of the Dutch Spotted it is great that we will be able to offer these attractive sheep at Builth In September.” 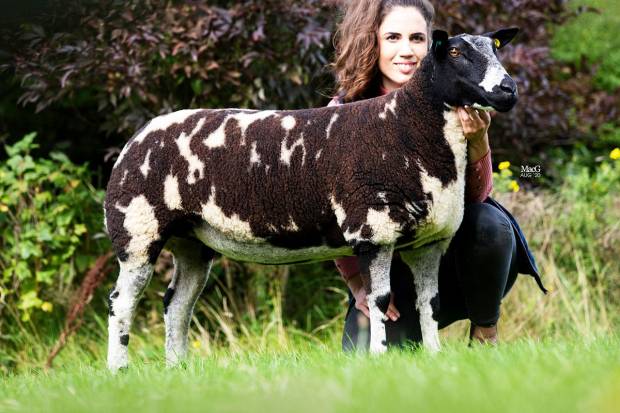