And he adds: “We have met the Royal Welsh officials and they’re very supportive of the sale and, given how keen members of our committee are, I’m quite sure it will be successful. I was heartened by the response we had from the Royal Welsh.

“We will really have to be on our toes, but people will probably be very glad to get onto the Royal Welsh Showground. There hasn’t been a show again this year, so perhaps it’ll be a warm up for the Winter Fair.

“I think it’ll be alright. There will be problems and it may be slightly different, but we’ll just have to adapt. There are challenges in that possibly some people will have found it easier to buy what they wanted closer to them.

“I think we’ve got to get the message across that, if you go to Builth, you’ve got a choice and it’s a wide genetic pool. There’s something to fit almost everybody’s budget. You’ve also got a level of inspection and that gives quite a bit of confidence.”

The sales had to be cancelled last year because of the pandemic, a decision Graham says proved right as there was ‘no way it could have possibly gone ahead’. He’s not worried about competition from online sales, saying the farmer’s eye is still as important as the data.

He feels that farmers know that if they choose the wrong ram or bull then they have to look at him for quite a few years. It’s important to get the choice right!

Graham and Mary have been supporting the sale since its inception in the late 1970s and have been there either buying or selling every year. Mary dryly agrees that she is quick to criticise if she doesn’t like a sire, although she concedes that she usually wants to buy something she can’t afford!

The couple began farming their 200 acre tenanted farm in Nelson 47 years ago and farm a further 40 acres in Raglan. They are well respected for the quality of their stock, having won very many championships until they stopped showing in 2003. Although Graham ruefully concedes that they have tended to get the ‘second ticket’ in the Royals!

A renowned judge, Graham believes Texels have had a hugely positive impact on the UK flock, as well as being the biggest breed. They run 80 pedigree Texel ewes, having first bought them In the late 1970s, although at the time he was quite anti imported breeds.

Graham was concerned about bringing in disease and felt that improving home breeds would have provided the lean meat the country needed. Gradually, he grew to appreciate them. He bought their first ram and his father bought their daughters a couple of ewe lambs in 1980.

He does believe that the diversity of sheep breeds in the UK is important. The couple run 80 pedigree Texel ewes and 300 South Wales Mountain and X breds. They also keep twenty Blonde Acquitaine suckler cows, selling the breeding stock privately and the suckled calves at Raglan Market.

Mary, who comes from a Herefordshire showing and pedigree background, particularly likes the camaraderie of the pedigree world. She says they first invested in the Texels ‘as a hobby’, but they had subsequently taken over their lives - for the better.

Mary said: “We’ve got a good South Wales Texel Club. Graham was on the Board for a long time, we were lucky enough to go to New Zealand with the Texel Society and we’ve got friends really around the world. You get to know people with pedigree breeding.”

Their biggest concern going forward is for the suckler herd in an area of high rainfall, 750 feet above sea level and exposed to the east wind. NVZ regulations will demand ‘prohibitive costs’, a level of investment that isn’t feasible on a tenanted farm.

They also worry that opportunities for the younger generation are severely limited. Both of their grandsons are involved with the farm, although their daughters have both chosen alternative careers. Graham and Mary recall buying a few cows for their first smallholding in Herefordshire and simply hand milking them, then sending the churns to Cadbury – something that couldn’t happen today.

Life and work are entwined and although each year Mary claims she’s ‘had enough of lambing’, in reality she’s determined to carry on.  She does the night shifts, which she likes because she can still cook dinner the next day!

They have no intention of hanging up their boots any time soon and Graham is relishing his role as Chairman of the NSA Wales & Border Ram Sales. It’s yet another enjoyable challenge for the couple, who met back in 1964 as students at Usk Agricultural College, when their first date was sitting together on a bus trip to the Dairy Show. 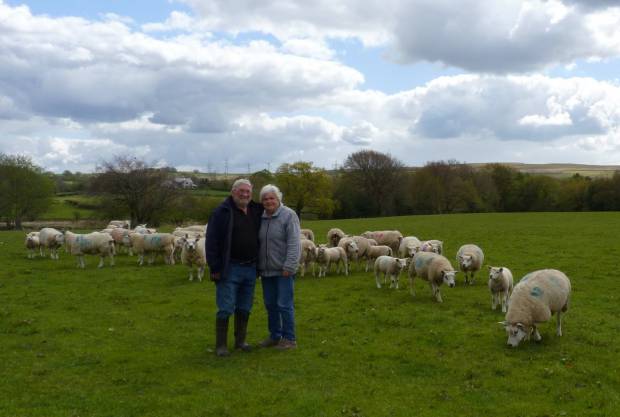