Entries for the first NSA Wales & Borders Early Ram Sale in two years, to be held at the Royal Welsh Showground, will close on Wednesday July 7th. The sale is organised by the NSA Wales & Border Ram Sales and eagerly anticipated by buyers and vendors.

It will take place on Monday 2nd August and is generally held to set the standard for the year. The last, held in August 2019, saw a Texel shearling Peacehay ram from the Chave family make 1400 guineas. He sold by phone bid to Phil Martyn-Uglow, who had been impressed by the tup family at the Devon County Show that year. The highest priced Charollais was a ram lamb, sold by Gethin and Eleri Gibbin for 1350 guineas, while a Suffolk ram lamb from Phil Poole made 800 guineas, as did a shearling Beltex X from Tim Prichard.

Sue Chave is looking forward to bringing 20 shearling Texel rams to next month’s sale. She says the Early Sale was badly missed last year, with margins down on what they might have been.And she added: “Everyone comes to Builth. It’s a known sale. It’s been going for so long that everybody comes to it. We missed the sale badly last year.“It’s the highlight of the year, going to the sales and catching up with your friends. It will be special this year, because we haven’t seen each other for so long.. “The trade has been fantastic for lambs and cull ewes. We’re holding the record at Sedgemoor for our cull ewes and at Exeter. It was unbelievable sale.”

Phil Martyn-Uglow bought the highest priced ram from the Chave family for his Hornacott Flock at Launceston, Cornwall, by phone in 2019. This year he is very much hoping to be there in person, harvest allowing.He said: “It was a really easy process to buy over the phone in 2019. I phoned an hour or two before the ram sold and everything was put in place.  I had already seen it on the farm. “I’d really like to come over this year. We haven’t been anywhere for so long. It’ll be good to see these big sales back. “The ram has done us really well. We’re so pleased with the purchase and looking forward to selling some of his shearlings ourselves this year.”

There will be masks, sanitisers and other Covid protocols at the Early Sale and there will, for the first time, be the opportunity to buy teaser rams and MV recipient ewes. The latter section will be open to any breed or cross ewe and sold in lots of two, three or five with a £5 per head entry fee.

Sheep won’t be inspected before the sale this year as a further precaution against Covid. However the schedule and catalogue will reflect the auctioneer’s warranty and vendors will be expected to maintain the sales’ valued high standards. Breed societies can, if desired, undertake inspections at their own cost. 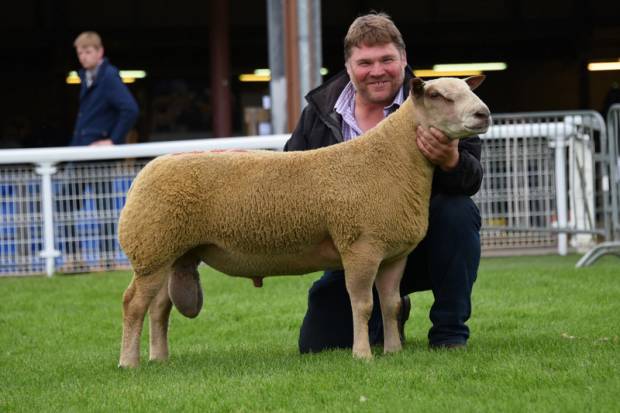 Champion Charollais Ram Lamb
NSA Wales and Border Ram Sales | Mrs Jane Smith | Long Wood Farm | Trostrey | Usk | NP15 1LA
Tel: 01291 673939 Email: [email protected]msales.co.uk
NSA is a Company Limited by Guarantee, registered in England (No. 37818). It is a registered charity in England and Wales (No. 249255) and in Scotland (No. SCO42853). NSA is VAT registered (No. 273 3469 44). NSA complies fully with the General data protection Regulation (GDPR). Contact NSA to request our privacy policy, to raise queries or concerns regarding GDPR, or to unsubscribe from NSA mailing lists. National Sheep Association is an organisation which represents the views and interests of sheep producers throughout the UK. NSA is funded by its membership of sheep farmers and it activities involve it in every aspect of the sheep industry.
your business your future