Choice is the Draw at NSA Wales & Border Ram Sales

There, Gwyn and Hazel Davies breed pedigree Texel sheep, while their son, Chris, breeds Blue Texels. They also run a flock of 300 Texel X commercial ewes, with the lambs sold into the Waitrose scheme at between 40 and 44 kilos. Gwyn and Hazel have been selling at the NSA Wales & Border Ram Sales for about 30 years.

Gwyn says:”The most we’ve taken has been about 25. The standard has got higher now, so we take about a dozen or so. We take a few less and just make sure that they’re the best quality that we’ve got.

“Sellers come from all over the country and buyers as well. So you’ve got to take your best sheep there. And the buyers just come from all over. We went to our local markets last year, which was very nice but you only got a small group of people from the local area to buy.

“Previously we’ve sold lambs as far as the North of England, North and South Wales, the eastern counties, all over really. You get a better price with a big crowd of people.

“And the buyers have got a lot of choice and they can buy in one day. A buyer will come to our pen and then go off to the Charollais and then off to another breed. They can get what they want all in one day.”

The family also enjoys the social aspect and the opportunity to go around and look at other sheep. They catch up with friends they may not have seen since the previous year.

Gwyn, Hazel and Chris sorely missed the sale last year – not realizing how reliant they were on it until it wasn’t there. Gwyn says prices were definitely down as a result.

Hazel agrees: “It’s nice to compare the sheep and look around. It’s such an important shop window. And we also buy stock rams while we’re there. So it’s a two way thing.

“People will travel from a good way to Builth Wells, because of the number of sheep there and the it’s the quality of sheep as well, all under one cover. And of course it’s so good to talk.”

The family breed for the commercial buyer, who wouldn’t pay the very high prices for the most select lines. It makes life simpler, because they don’t have the added costs of embryo transfer to aim for elite breeding. The  rams are ideal for crossing, but probably not the quality demanded by the top breeders.

The rams are fed, but not excessively. They’re on grass as much as possible and always out, lambing in from the end of February, with the ewes carrying twins getting creep. The lambs are fed creep after weaning and are out on grass again in the Spring until about eight weeks before the sale.

Gwyn says: “To my mind they’ve got to have a few months on grass, because when that commercial man buys it, he’ll put that ram on a bunch of ewes. Then he’ll put it in a paddock somewhere and forget about it until he wants it the following year. It’s got to be able to survive.”

Chris began his Beacons View Blue Texel flock in order to improve his trimming skills. Their dense fleece lends itself to trimming, which isn’t allowed in the Texel breed. He has developed a 30 strong flock, from the initial four ewes he purchased seven years ago.

He says: “They’ve got lovely markings and colours and are a very attractive breed. So it was good to start with them and my interest in them just grew.

“Then you meet people along the way in the breed and you make friends for life on the pedigree circuit.”

Many of the rams are sold at the NSA Wales & Border Ram Sales at the Royal Welsh Showground. Chris takes a couple of rams and a couple of yearlings to the main sale.

Chris is enthusiastic about the prospects for this year: “You can take your sheep to one sale at the NSA Wales & Border. You can’t sell the same amount of sheep in any other sale.

“It works for us to take all the sheep, the tups, the yearlings there in a day and sell them. It’s ideal really.”

Gwyn stresses that, on 140 acres 1000 feet above sea level, it’s important to make the very best of everything. And so they decided to specialize in producing pedigree Texel rams. They now have a flock of 70 pedigree ewes and the rams are an important income stream. There are also 30 Limousin X Belgian Blue suckler cows, with the calves sold at 10 to 12 months in the Brecon Store Cattle Sales.

The family show at local events, to build up and reinforce the reputation of the flock. They have had a fair spread of success, including a championship at the NSA Wales & Border Sales society show.

Hazel also runs self-catering units from the farm and says her guests take a keen interest in the stock. 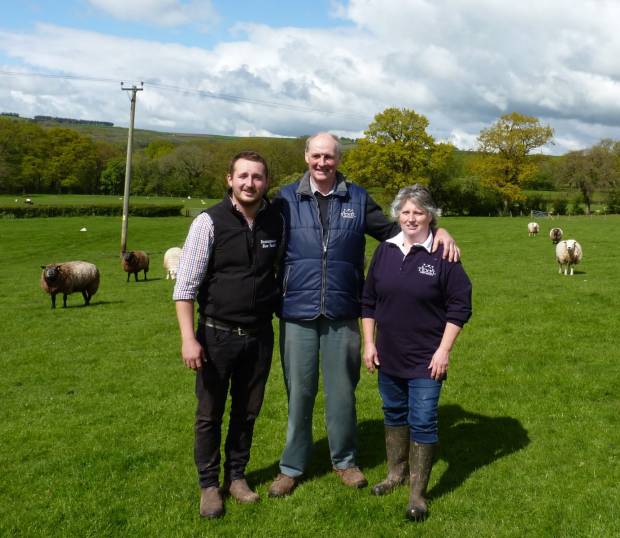 Gwyn, Hazel and Chris Davies
NSA Wales and Border Ram Sales | Mrs Jane Smith | Long Wood Farm | Trostrey | Usk | NP15 1LA
Tel: 01291 673939 Email: [email protected]
NSA is a Company Limited by Guarantee, registered in England (No. 37818). It is a registered charity in England and Wales (No. 249255) and in Scotland (No. SCO42853). NSA is VAT registered (No. 273 3469 44). NSA complies fully with the General data protection Regulation (GDPR). Contact NSA to request our privacy policy, to raise queries or concerns regarding GDPR, or to unsubscribe from NSA mailing lists. National Sheep Association is an organisation which represents the views and interests of sheep producers throughout the UK. NSA is funded by its membership of sheep farmers and it activities involve it in every aspect of the sheep industry.
your business your future