There was a lively trade with a top price of 8,000 guineas, strongly increased averages and a turnover of nearly £2million at the NSA Wales & Border Main Sale. Consignors and vendors were clearly glad to be back, following the sale’s absence last year.  They enjoyed trading in the late Autumn sunshine at the Royal Welsh Showground on Monday 20th September. High prices, quality tups and a great atmosphere distinguished the NSA Wales & Border Main Sale,

Turnover reached £1.979 million, £152,000 up on the 2019 turnover with fewer sheep forward. There was a top price of 8,000 guineas and average prices were £694.63 against the 2019 average of £510.45. A total of 2,849 rams sold, representing 88.1% of the sheep forward.  Chairman Graham Jones was delighted: “The top end has been really fantastic, with a solid trade right through.  “It’s quite exciting that the North Country Cheviots had a big entry and they sold well, with a top price of 3,600 guineas. They were virtually all sold out and two rams beat their breed record at Builth  “It was especially nice to welcome the Dutch Spotted to the sale for the first time. They had a solid clearance, highlighted with a 2,000 guinea top price for a ewe lamb.”  “People were very happy to be back, meeting people they hadn’t seen for a long time. And the weather helped. I got around every ring and it seemed to all be going very well. I knew that if we got the sheep here then they would sell.

The highest priced ram, a shearling Caereinion Dan Dare out of Granite Untouchable, was sold by regular Texel consignor, Cefin Pryce, for 8,000 guineas. He has been selling at the NSA Wales & Border Main Sale since 1993 and sold the top price 12,000 guinea ram some years ago.  Cefin and his wife Nia and family run 30 pedigree Texel ewes at Yr Helyg, Llanfair Caereinion. They were delighted with the day’s trading. He said: “It’s been brilliant and makes it all worthwhile. People keep coming back and clearly missed it last year. The best sheep have had a very good sale.”

Andrew Reed, of W O J Reed, was delighted to have the second highest price of the day, with 6,500 guineas for their Scolton Dynamo. The shearling is out of Canllefaes Big Boy, weighs 160 kg and is one of triplets. Andrew topped the 2010 sale with an 8,200 guinea ram.

The Hexham and Northern Marts ring saw Michael James’s Duhonw shearling sell for 6,500 guineas. He makes the trip from nearby Blaenuhondu, Maesmynis, every year and this year brought 20 tups.  The Blue Faced Leicester ring saw a top price of 6,000 guineas for Scott and Claire Thomason’s ram lamb, Piel View P3. He was one of three tups they brought from Walney Island, Cumbria, and out of a Cernyw  tup, bought from Elfyn Owen last year. 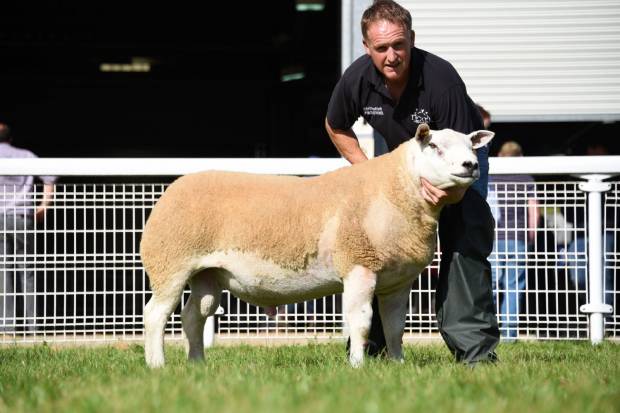 Highest price Lot 2237 from Cefin Pryce at 8000gns.
NSA Wales and Border Ram Sales | Mrs Jane Smith | Long Wood Farm | Trostrey | Usk | NP15 1LA
Tel: 01291 673939 Email: [email protected]
NSA is a Company Limited by Guarantee, registered in England (No. 37818). It is a registered charity in England and Wales (No. 249255) and in Scotland (No. SCO42853). NSA is VAT registered (No. 273 3469 44). NSA complies fully with the General data protection Regulation (GDPR). Contact NSA to request our privacy policy, to raise queries or concerns regarding GDPR, or to unsubscribe from NSA mailing lists. National Sheep Association is an organisation which represents the views and interests of sheep producers throughout the UK. NSA is funded by its membership of sheep farmers and it activities involve it in every aspect of the sheep industry.
your business your future