NSA Breakfast club webinars are proving to be hugely popular amongst the sheep farming community and our sixth webinar "The return of Dolly? - An early morning exploration of Sheep Gene Editing” was no exception. Thomas Carrick, NSA Northern Region Chair opened with the background behind NSA delving deep into the controversial subject of genetics, explaining that Defra have released a consultation aimed at changing the regulation on genetic technologies in England and Wales in light of our exit from previous EU restrictions. We at NSA felt that our members and wider interest groups would be keen to have a greater understanding of the genetic technologies available, in particular how gene editing differs from genetic modification, so we pulled together a panel of experts to help us out.

Firstly, Dr. Simon Lillico from the Roslin Institute provided a brief history of general breeding practices and highlighted how Robert Bakewell revolutionised British Agriculture by building upon Charles Darwin’s theory of natural selection, suggesting that “intentional animal breeding should be from select individuals with desirable characteristics”. Selective breeding is not a new technology in anyway, shape or form and has been used successfully for many years to breed desirable traits… the main focus being productivity gains, e.g. more litres of milk from less dairy cows. However, selective breeding does have its limitations, and this is where Simon suggested that gene editing could play a vital role in the future.

After a short flashback to our school days, the audience was educated on DNA, how the genome works and basic principles of genetics allowing a deeper exploration into how gene editing differs from genetic modification.

GM is a blunt tool allowing us to take genetic material from one organism and insert into another organism. Simon demonstrated a striking visual example of this where green fluorescent protein, originally harvested from jellyfish has been successfully inserted into mice, chicks and pigs that when exposed to light in the blue to ultraviolet range, fluoresce green. Obviously, there is no desire for our livestock to all look like glow sticks, but it shows that the technology is feasible. GM is a really useful scientific tool for producing livestock to create pharmaceutical proteins in their blood or milk but is not used in agriculture due to public perception.

GE is completely different to GM… it is the act of re-writing the existing genome NOT inserting genomes from another organism. To put it simply, GE is a pair of DNA scissors that allows us to cut the genome at a precise point (editing the sequence) which results in changes to the form and function of the animal. Simon described an excellent example of where GE has been successfully used in the lab to remove the protein sequence where the porcine reproductive and respiratory syndrome (PRRS) virus in pigs normally binds, resulting in them being resistant to infection. This not only significantly improves animal welfare, but the farmer would also benefit from improved productivity and it would benefit the wider society as it has the potential to drastically reduce the antimicrobial usage in pig production, helping us tackle antimicrobial resistance in both livestock and human populations.

After an eye-opening presentation from Simon, Dr. Emily Clark (also from the Roslin Institute) explored how GE can be applied to the sheep sector to improve future welfare, productivity and sustainability. Emily’s presentation was focused on a novel use of GE to produce surrogate sires, aka ‘super dads’. The model is still in the early developmental stages but is similar to that of embryo transfer but in rams, rather than ewes. In very simplified terms, GE is used to produce the surrogate sires who have functioning testicles but lack the ability to produce any sperm. The sperm of an elite sire is then utilised in surrogate sires, meaning that instead of having one elite ram, there could potentially be thousands who can contribute to healthy and sustainable dissemination of the desired characteristic. There may be concerns regarding ‘Frankenstein sheep’ but GE is only used for making the surrogate sire. No genetically altered DNA is passed on from the surrogate to any of his offspring, meaning lambs are 100% free of any GE material. The technology is only required to edit the surrogate for the above process.

The webinar concluded with Thomas chairing a lively Q&A session, where Amanda Carson (President of the Sheep Vet Society), Mike Coffey (SRUC) and William Haresign (FANgR) joined Simon and Emily on discussing various genetics questions, the most important for our sector being that of public perception and acceptance of this technology. GE could provide so many potential wins for the sheep sector particularly in combatting some of our iceberg diseases and anthelmintic/antibiotic resistance challenges but without the general public on board, there’s no scope for its use (despite the huge gains). It’s a very exciting time and with the active Defra consultation on ‘the regulation of genetic technologies’, NSA will be following this subject closely to keep you updated on any changes being proposed. We are a long way off GE technologies becoming the ‘norm’ and we need to ensure we can safeguard our industry against any potential risks associated, but with greater research and investment it could be another step in the right direction towards holistic, sustainable, climate friendly sheep farming in the future. 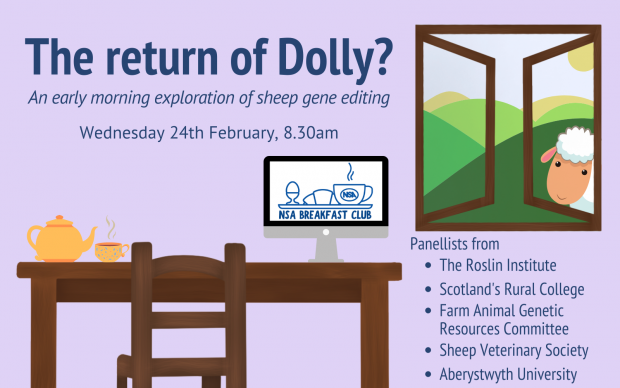