Youngsters up to the age of 26 with an interest in the sheep industry are being invited to enter for this year’s NSA Next Generation Shepherd of the Year Competition, which has a total prize fund of £1015 up for grabs.

The competition is being sponsored by the British Texel Sheep Society. The winner will receive a trophy and cash prize of £300 and will be given the opportunity of representing Scotland in the finals at the NSA Sheep Event at Malvern on, July 28, 2020. The highest placed competitor under the age of 21 will also receive a prize of £100.

The International Sheep Dog Society is also supporting those entrants taking part in the sheep dog handling element of the competition, including a first prize of £100.

British Texel Sheep Society chief executive John Yates said the Society was delighted to able to support this important part of the event. “As the industry moves to a post-Brexit era there has never been a more important time to retain and recruit the very best young people for the UK sheep industry.

“The sheep industry is an exciting one to be involved with at every level and competitions such as this are a great way of encouraging young people to hone their skills and explore the many opportunities available to them in the sheep sector.

“The Society, through its Youth Development Programme, is actively encouraging young people to consider a career in sheep farming at every level, be that practically on-farm or in an allied industry.

“The modern sheep industry has a wide variety of roles suited to all levels of experience and skill, with technology and AgriTech playing an increasingly important role in flock management, be that in the form of genetic improvement, better grassland management or data recording,” he added.

“We invite all young persons who reside in Scotland up to 26 years of age on July 28, 2020 to enter,” said organiser, Euan Emslie, secretary of NSA Scotland. Closing date for entries is Friday, May 31, and a maximum of 20 entries will be accepted.

The competition will be a major feature of NSA Highland Sheep 2019, which is being hosted by the Sutherland family on their 1700 acre farm of Sibmister, where stocking includes a commercial flock of 1500 Texel x Cheviot ewes, pedigree flocks of Suffolk and Texel ewes and a spring-calving suckler herd of 400 Simmental x Longhorn cows.

Features of the event, which is expected to attract a large attendance of sheep farmers from throughout Scotland and beyond, will include a comprehensive seminar programme, individual workshop’s, wool shearing, grading, spinning, felt making, crook making, lamb butchery and cooking demonstrations, stockjudging, NSA Next Generation Shepherd of the Year, sheep dog trial, and show and sale of ewe hoggs.

Leading animal feed specialists, Harbro, have been confirmed as major sponsor along with their key distributor in the Caithness area, W and A Geddes, and other other mainline sponsors confirmed so far include ANM Group, British Wool, Caltech Crystalyx, MSD Animal Health and Shearwell Data and the event will be supported by Quality Meat Scotland.

The Shepherd of the Year competition is due to start at 8.30am and the presentation of prizes will take place at 3.30pm. Competitors wishing to take part in the sheep shearing element of the competition should note that they need to have a BWMB Blue Seal Certificate which must be produced on the day.

Application forms for the competition, and further information about the event, including sponsorship and trade stand opportunities, can be obtained from Euan Emslie, Organiser, NSA Highlandsheep 2019, E-mail: [email protected] or mobile: 07718 908523. 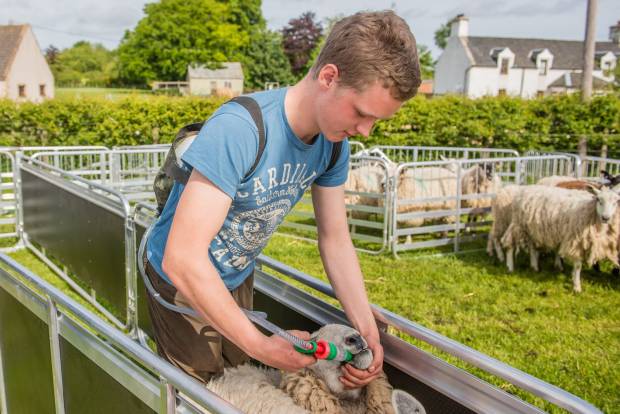