NSA pays tribute to Lord Henry Plumb of Coleshill D.L., an outstanding statesmen of agriculture of the 20th and 21st century.

NSA joins with numerous other farming organisations in remembering the tremendous contribution Lord Henry Plumb made over his many years as a farmer, politician, campaigner and advocate of UK agriculture. As a former NSA President and current NSA Vice President, NSA benefitted from the passion and tenacity that Lord Plumb demonstrated throughout his glittering and impactful career.

Phil Stocker, NSA Chief Executive, comments: "Lord Plumb is one of the best known and well respected people of my generation and from a time in my life where I just read about him in the farming press, to a time when he was one of our respected body of National Sheep Association Vice Presidents. I have nothing but admiration for what he achieved. He will be sorely missed but greatly celebrated."

John Thorley, OBE, FRAgS, former NSA Chief Executive, knew Lord Plumb for many years, personally and professionally. He says :  "Henry was a personal friend of very long-standing and while his most well-known contribution to UK farming was his nine-year tenure of office as NFU President, he also spent a similar time as Honorary President of NSA. He was a man whose knowledge, personality and sheer ability allowed him to cross all boundaries. When he demitted the NFU office and stood for election to the European Parliament as a conservative for the Cotswold area, he won the seat with a comfortable majority demonstrating his clear ability to get on with everyone. A majority of his fellow MEPs later elected Henry to become President of the European Parliament, further evidence of his universal appeal. He became President of NSA in 2001 bringing with him a great deal of knowledge of how to deal with the issue of devastating Foot and Mouth disease of the time having sat on the Northumberland Committee in 1969 which reviewed the 1967 outbreak and developed a plan on how to face the future.

"The knowledge and contacts which Henry brought to NSA were immeasurable for apart from the detailed knowledge of the workings of the European Union he had also become an international figure with global contacts and a commitment to bring unity wherever that was possible. Right up until the time of his passing he was in regular contact with his friends all over  the world

"Henry brought a huge amount to NSA, some of it before he became President when he contributed greatly to developing a strong and positive relationship between NFU and NSA. Ensuring always that when a pertinent point needed to be made to the government it came from the entire industry. His unifying nature, an important part of his character was like a beacon always recognising that on matters of serious difference of principle he would do battle in a very constructive way."

More information can also be found on the Henry Plumb Foundation website here. 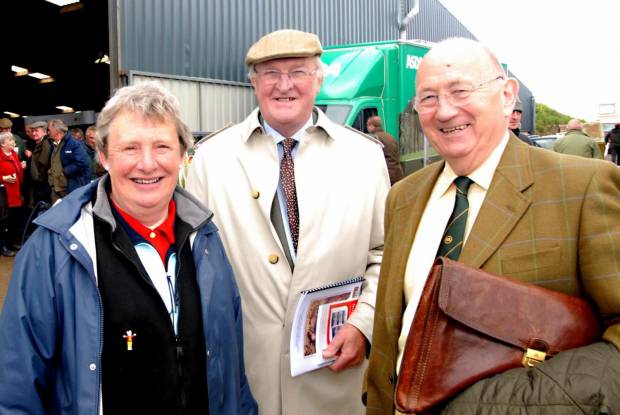 Lord Plumb (centre) with John Thorley (then NSA Chief Executive) and Margaret Dalton (a fellow NSA Vice President) at NSA Welsh Sheep 2009.
National Sheep Association | The Sheep Centre | Malvern | Worcestershire | WR13 6PH
Tel: 01684 892661 Fax: 01684 892663
NSA is a Company Limited by Guarantee, registered in England (No. 37818). It is a registered charity in England and Wales (No. 249255) and in Scotland (No. SCO42853). NSA is VAT registered (No. 273 3469 44). NSA complies fully with the General data protection Regulation (GDPR). Contact NSA to request our privacy policy, to raise queries or concerns regarding GDPR, or to unsubscribe from NSA mailing lists. National Sheep Association is an organisation which represents the views and interests of sheep producers throughout the UK. NSA is funded by its membership of sheep farmers and it activities involve it in every aspect of the sheep industry.
your business your future