SEMINARS AND WORKSHOPS A KEY FEATURE AT NSA SCOTSHEEP 2018

Industry experts will be giving their views on a range of topics relating to the sheep industry in a comprehensive seminar and workshop programme at Scotland’s national sheep event, NSA Scot Sheep 2018, on Wednesday 30th May.

The one-day, biennial event, will be held at sheep and beef farm - Kings Arms Farm, Ballantrae, South Ayrshire, courtesy of Robert & Caroline Dalrymple, and is being organised by National Sheep Association Scotland.

NSA Scot Sheep will be officially opened at 10.00 am, by John Scott, MSP for Ayr, who farms at Balkissock, Ballantrae, and a former chairman of NFU Scotland’s hill farming committee.

No fewer than 16 speakers will take part in four hour-long seminars focussing on what impact Brexit could have on trade, marketing and future support, the next generation, sheep health issues and half-hour workshops. The topicality of the subjects is sure to prove a real draw for the thousands of sheep farmers from throughout Scotland, the North of England and Ireland expected to attend the event.

“The seminars are set to create huge interest with a tremendous line-up of speakers, all recognised experts in their particular field,” said organising committee chairman, George Allan, a representative with Carrs Billington Agriculture and Secretary of the Scotch Mule Association.

The first seminar at 10.45pm will discuss “What impact could Brexit have on lamb trade & marketing” and will be chaired by John Fyall, NSA Scottish Region Chairman. The panel of speakers will include Jim McLaren, Chairman of Quality Meat Scotland, Isla Roebuck, Dunbia a division of Dawn Meats, Scott Donaldson, President of the Institute of Auctioneers & Appraisers in Scotland and Awal Fuseini, Halal Manager, AHDB Beef & Lamb.

At 12 noon, Trevor Richards, Chairman of British Wool will give a ten minute introduction to British Wool’s new entrant scheme and will be followed by a forty-five minute seminar on “Next Generation – Next Chapter”, chaired by Jennifer Craig an NSA Scottish Region Committee Member and one of the first NSA Next Generation Ambassador’s from 2014. The panel of speakers will include Rory Gregor, Clarke Hibberd and Alister Watson, like Jennifer also NSA Scottish Region Committee Members and past NSA Next Generation Ambassadors.

Steve Raphael a partner at Academy Vets in Stranraer will chair a session on the ‘Resilience of the National Sheep Flock to sheep diseases” at 1.00pm. The speakers and topics will be Dr Christina Cousens, The Moredun Research Foundation on Jaagsiekte Sheep Retrovirus (JSRV) and the disease it causes, Ovine Pulmonary Adenocarcinoma (OPA). Marion McMillan, Veterinary Investigation Officer, SAC Consulting (general health issues) and Heather Stevenson, also a Veterinary Investigation Officer at SAC Consulting (liver fluke).

The final seminar at 2.15pm will focus on “What impact could Brexit have on Future Support” and will be chaired by George Milne, NSA Scottish Region Development Officer. The panel will comprise of David Barnes, National Advisor on Agriculture Policy at Scottish Government, Phil Stocker, Chief Executive of National Sheep Association and Jeremy Moody, CAAV Secretary and Adviser.

There will also be a selection of half-hour workshops taking place throughout the day. At 10.30am Bridget Girvan a veterinary adviser with MSD Animal Health will present a workshop on stamping out lameness in sheep. This will be repeated at 2.00pm.

At 1.30pm a representative from British Wool will talk about maximising the value of your wool by promoting the benefits of excellent fleece presentation and marking fluid. 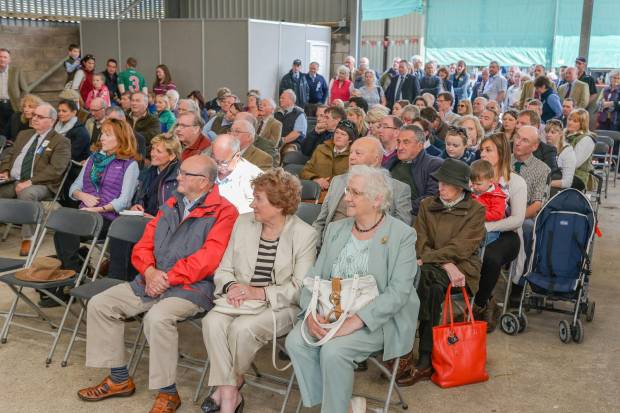