With more than 250 people of all ages attending, the first ever Youthful Shepherds Event on Saturday (8th June) has been hailed a huge success by the National Sheep Association.

The event was created as part of NSA’s Young People in Sheep initiative, a multi-dimensional project that pledges to support the future of the sheep industry through young people. It was hosted by the NSA Eastern Region at Newmarket, Suffolk, but was open to youngsters all over the UK with an interest in sheep, whether they were already working in the sheep sector or wanted to in the future. A unique opportunity was provided for new and potential new entrants to have access to industry leaders and influencers, gain information and advice, and have a say about what the industry could do to better support them.

The NSA Youthful Shepherd Event was opened by Sir Jim Paice and started with an Open Forum that allowed attendees to quiz a range of people on every aspect of working in the sheep sector. The panel was chaired by Chris Lloyd of Eblex and included Sir Jim Paice, who has worked as a farm manager and contractor as well as leading a life in politics. Other experts included Phil Stocker (NSA Chief Executive), Dan Phipps (sheep farmer and event host), Charles Sercombe (sheep farmer and NFU Livestock Board Chairman), Mike Credland (sheep farmer and founding member of the May Hill Lamb Group), Catherine Nakielny (sheep farmer and Nuffield Scholar), Matthew Smart (of Eastern Counties Finance and Agribank Plc), Nick Davies (of Dunbia), and Andrew Blenkiron (Estate Director at Euston Estates).

There followed practical demonstrations and also the Young Shepherd of the Year Competition, which served as a regional qualifier for the National Final in Worcestershire in 2014. Competitors were judged on five aspects of practical sheep farming – lamb selection, shearing, foot-trimming, demonstrating the correct drenching and vaccination techniques, and answering a flock management and husbandry questionnaire.

This was won by 25-year-old Marie Prebble. Marie Prebble farms 230 acres with her parents, who are Ministry of Defence tenants near Canterbury. She is a member of Canterbury YFC and a NSA South East Region Committee Member.

The NSA Youthful Shepherds Event was held at Rutland Yard, Newmarket, Suffolk, by kind permission of Darley Stud Management Co Ltd. Dan Phipps, Head Shepherd at Darley and NSA Eastern Region Vice Chairman, was part of the Organising Committee that was instrumental to the event getting off the ground. He says: “I was very pleased with how many young people came along to the day, as I was with the number of people from all sections of the sheep industry who joined us to impart information and demonstrate the wide and varied opportunities the industry has to offer.

“Some of the young faces were known to me and are already involved in various parts of the industry. Others, who may have come along just to have a look, will have certainly gone away with an appetite whetted. Like many other industries, the sheep sector is reliant on the people involved – and going forward it is reliant on the people it can attract – so to see people of all ages interacting was great.

“A special thanks to Sir Jim and Lady Paice for Sir Jim’s opening remarks and Lady Paice’s involvement in the prize presentation. They were there through to the day’s completion, which ended on a high with some less serious elements, including a ‘shear-a-sheep- eat-a-pie-drink-a-pint competition. There was a surge of late entries for this and a highlight of the day was seeing local farmer John O Dell compete alongside one of our prize-winning Young Shepherds, George Hartley Webb, with an age gap of some 50 years!

“Thank you to everyone who attended the first ever NSA Youthful Shepherds Event and making the work of Andrew Foulds, NSA Eastern Region Chairman, and the rest of organising committee so worthwhile.” 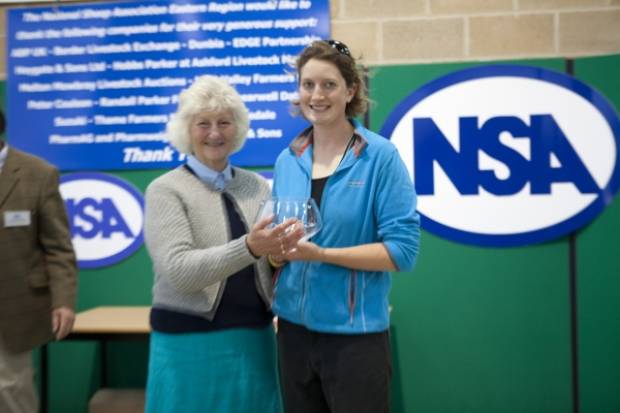 There was great enthusiasm for the competitions and demonstrations.