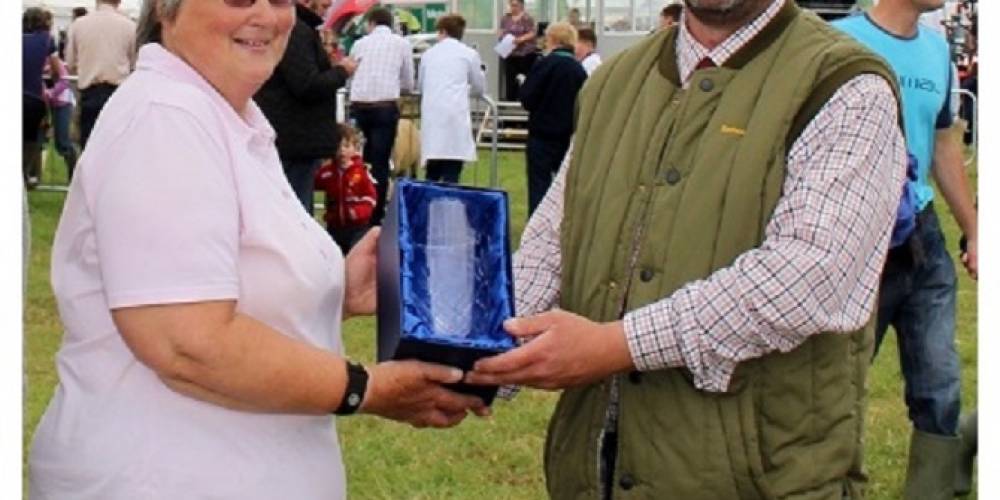 South West ‘unsung hero’ gets her moment in the spotlight

Years of tireless work for the National Sheep Association (NSA) have been recognised with Sue Martyn of Launceston, Cornwall, being named as the very deserving recipient of the Bob Payne Memorial Award for NSA Unsung Hero.

This award is only given when an exception individual is identified, and Sue joins a very short list of NSA volunteers and office holders who have been singled out over the years. She was selected for her previous roles as NSA South West Regional Manager in 1999 and NSA Sheep South West Organiser in 2001, which she continues to do to this day alongside a trusted team. Sue’s ongoing service to the NSA South West Region Ram Sale is also recognised.

The award comes with an engraved cut glass vase, which was presented to Sue by Dave Gregory, fellow NSA South West Committee member and NSA Honorary Treasurer. They are pictured at North Devon Show, as Sue’s efforts for NSA are in addition to a busy calendar of showing quality stock at a number of events in South West England and beyond.

Dave has worked alongside Sue on many NSA Sheep South West events, seeing her hard work result in the technical show growing and growing. He says: “Sue has been the face of NSA in the South West and I have been privileged to work with her as NSA Sheep South West Chairman. She gets the job done every time and more than deserves this award to recognise the hours of work she puts in that are often unseen. Her enthusiasm for NSA and for sheep is infectious and it is wonderful to know she is now passing on her skills and teaching her grandchildren to present and show sheep.”

Taking her grandson to a local show was the reason Sue couldn’t collect her award on the night it was original announced, at the NSA Sheep Event Dinner in late July. More than 300 people gathered for the industry event where Peter Baber, NSA Vice President, named Sue as the recipient. He said that night: “Sue’s work is always essential but often done behind the scenes without people knowing the great lengths she goes to. I cannot count the times she has approached me with a big smile and left me standing a few minutes later thinking ‘how did I volunteer for that?’”