TSEs: The case for the relaxation of sheep controls

A NSA report assessing the current situation regarding ovine TSE controls and making recommendations for progress towards the relaxation of relevant regulations. Please direct any questions to [email protected].

Click here for comments from other industry organisations supporting NSA's stance on TSEs.

Scrapie exists in two similar but unrelated forms: classical and atypical. Classical scrapie is contagious between sheep. Lateral transmission of classical scrapie occurs naturally, possibly through consumption of or exposure to infected placentas. Infection may also be transmitted to lambs through the milk of infected ewes. Classical scrapie is seen most commonly in animals aged between two and five. Atypical scrapie (Nor98) is a spontaneously occurring, sporadic, degenerative brain condition of older sheep and goats (generally over five years of age).

Regulations for the monitoring of ovine TSEs were brought in as a related precaution alongside BSE controls following the BSE crisis of the mid-1990s, as it was feared BSE might cross species from cattle to sheep and that BSE may present in sheep in the form of scrapie. The practice of feeding meat and bone meal in ruminant rations, and potentially feeding infected material, was identified as a potential risk to human health. Following the BSE crisis the feeding of mammalian protein to ruminants was prohibited, with strict controls set in place.

In the field, over nine million samples have been taken by 2014 across all EU member states and not a single case of BSE being transmitted naturally to sheep has ever been found. In laboratory conditions it was found to be possible to infect sheep with BSE, although this was achieved only by feeding fresh infected brains, something never practised. In addition, BSE infection of sheep achieved under laboratory conditions showed that contamination was not just restricted to Specified Risk Material (SRM) with up to 30% of infectivity distributed through edible parts of the sheep carcase, including in young sheep. Yet TSE controls only require that SRM material be removed from sheep over 12 months of age (as defined by the emergence of the first permanent incisors), suggesting it was accepted that any risk of BSE crossing species naturally was low.

On 1st March 2013 the requirement to test healthy slaughtered cattle for BSE ceased for all animals born in EU states (except Romania and Bulgaria). As BSE testing requirements are being relaxed, the rules regarding ovine TSE monitoring, which were originally introduced as a parallel precaution to these requirements, must also be reviewed. These regulatory practices create inconvenience and confusion, are costly to the sheep industry, the government and the national economy, and undermine confidence in sheep farming.

Regulation (EC) No. 999/2001 of the European Parliament requires the removal of SRM from the carcases of UK sheep slaughtered for human consumption, in order to prevent this tissue entering the human food chain. Theoretically, SRM includes those tissues which might potentially harbour detectable TSE infectivity. The parts of UK sheep presently specified as SRM vary between sheep aged under 12 months and sheep aged over 12 months (as defined by the emergence of the first permanent incisors).

Regulation (EC) No. 999/2001 of the European Parliament requires that EU member states perform active surveillance of TSEs in sheep, goats and cattle. The UK must test the following quotas of sheep annually:

The UK must also test sheep from scrapie infected flocks (see table).
The 10,000 fallen stock samples are obtained from carcases chosen for testing randomly at animal by-products plants and on routine inspections by Animal Health and Veterinary Laboratories Agency (AHVLA). The Government arranges and funds the collection, testing and destruction of animals chosen for sampling.

Regulation (EC) No. 1915/2003 of the European Union imposes compulsory controls on sheep flocks found to be infected with scrapie. In flocks where there is a confirmed case of classical scrapie the following options are available:-

The UK Government funds the implementation of the CSFS domestically. In flocks where a case of atypical scrapie is confirmed it is possible to opt for monitoring rather than culling.

3. A comparison of cattle and sheep controls: Overview of regulations for cattle

In the UK the requirement to test healthy slaughtered cattle for BSE ended on 1st March 2013. This applies to cattle born in EU Member States (except Bulgaria and Romania) – see table below. Opinion published by the European Food Safety Authority (EFSA) in December 2010 indicates that change to the testing regime is likely to have a minimal impact on the potential for animals with classical BSE entering the food chain. The Spongiform Encephalopathy Advisory Committee (SEAC) has also advised that in the short-term there is likely to be an insignificant additional risk to human health as a result of making this change.

Clearly it is considered that this relaxation of BSE controls will not present a significant increase in the human health risk associated with BSE.

A comparison of cattle and sheep controls: Comparison with regulations for sheep

Ovine TSE controls were originally introduced alongside BSE testing regulations as a precautionary measure, due to concern over the potential transfer of BSE to sheep and a possible relation between BSE and scrapie. There is currently no evidence of the natural occurrence of BSE in sheep or that BSE and scrapie are related. There is also no evidence of a risk to human health from ovine TSEs. Cattle are susceptible to the natural contraction of BSE, the disease strongly linked to variant CJD in humans. In light of these facts, it is logical that as the relaxation of BSE regulations for cattle is not considered a significant human health risk, a relaxation of ovine TSE controls would constitute an even lesser risk, if any.

A comparison of cattle and sheep controls: The decline in scrapie cases 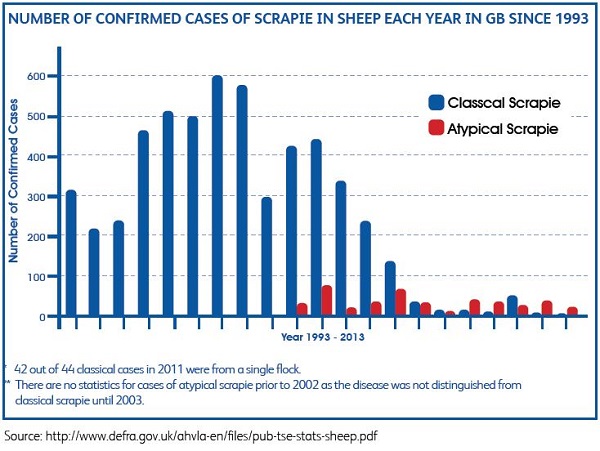 4. Costs of present controls on the industry: Costs of carcase splitting

The removal of the spinal cord from sheep aged over 12 months or with a permanent incisor erupted through the gum is currently undertaken in the UK through the process of carcase splitting, in which carcases are halved lengthways down the vertebral column. The costs associated with this, according to information gathered by NSA, include:-

Without considering its effect on the export potential and domestic competitiveness of UK sheep meat, the estimated total yearly cost of carcase splitting to the UK sheep industry is approximately £23,308,800.

Costs of present controls on the industry: Cost to exports by association

Implementation of strict ovine TSE controls diminishes the reputation of UK sheep meat on the export market. The enforcement of stringent rules around scrapie gives the impression to potential importers that UK sheep are not healthy animals that produce safe, high quality meat, thereby reducing international demand for UK sheep meat. This effect is enhanced by the popular association of scrapie with BSE. As mentioned above, the export potential of UK sheep meat is also reduced by the practice of splitting carcases. It is difficult to put a figure on this disadvantage, however export demand is growing and the UK is not optimising its contribution to export values.

Elsewhere in the EU, notably in France, the spinal cord of older sheep is removed by sucking SRM from the carcase, thereby removing the necessity to split the carcase and avoiding the associated devaluation suffered by split carcases. Removal by suction has costs of its own, however, including:-

In addition, suction equipment is not reliably able to thoroughly remove all the SRM from a carcase so would require an end to the gold plating applied to the current EU legislation by the Food Standards Agency.

Alternatives and potential amendments to TSE controls on sheep: Carcase splitting at emergence of the second pair of permanent incisors

Domestic regulations currently require carcases to be to split if the animal is over 12 months old or a single permanent incisor has emerged. Lambs’ incisors generally emerge in pairs and the emergence of just a single incisor is unlikely. The eruption of a lamb’s first incisors is unpredictable and can occur at varying points in development and so their emergence therefore cannot provide an accurate measure of an animal’s age, and an animal aged significantly under 12 months may have its first set of incisors. As the earliest onset form of scrapie does not commonly occur until two years of age, the current splitting of carcases aged 12 months and potentially younger is unnecessary. Upland farmers grazing some of our most iconic indigenous breeds are particularly badly hit by the 12-month/first incisor rule. The hard terrain of upland areas often results in lambs taking longer to reach killing weights, but grazing this type of sheep in less favoured area has environmental, social, health and economic benefits that go beyond the direct farming economy and should therefore be supported (Click here for NSA’s The Complementary Role of Sheep in Less Favoured Areas report for the full range of benefits provided by sheep grazing in upland areas of the UK.)

Alternatively, a precedent has already been set with sheep identification rules that the end of June following the year of birth marks the 12-month age for all lambs regardless of when precisely they were born in the year previous. Using the end of June as a cut off-date, after which all carcases would be split, would reduce the time and cost of checking for teeth. It would also be far more transparent and farmers, markets and abattoirs would all be very clear on where they stood.

Scroll to the bottom of the page to download a summary of this report and a printable PDF of the full report.
National Sheep Association | The Sheep Centre | Malvern | Worcestershire | WR13 6PH
Tel: 01684 892661 Fax: 01684 892663
NSA is a Company Limited by Guarantee, registered in England (No. 37818). It is a registered charity in England and Wales (No. 249255) and in Scotland (No. SCO42853). NSA is VAT registered (No. 273 3469 44). NSA complies fully with the General data protection Regulation (GDPR). Contact NSA to request our privacy policy, to raise queries or concerns regarding GDPR, or to unsubscribe from NSA mailing lists. National Sheep Association is an organisation which represents the views and interests of sheep producers throughout the UK. NSA is funded by its membership of sheep farmers and it activities involve it in every aspect of the sheep industry.
your business your future