Sheep farming is a demanding and varied lifestyle. There is always a different job to be done, and the tasks and challenges change with the seasons. Let’s have a look at a year on a sheep farm.

Every farm is different, and there are a huge variety of systems and schedules in use across the UK. For this example, we will look at a traditional lowland farm producing lambs to put delicious meat on the table. We’ll start in September, just before the ewes go out with the rams to breed the next year’s crop of lambs. 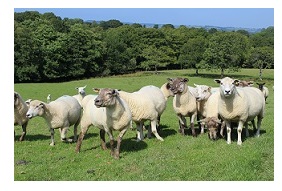 Farmers check the condition of their ewes in September to make sure they are not too fat or too thin and are ready for mating with the ram. There is a system for scoring the body condition of sheep. By pressing your hand over and around the backbone in the loin area, which is behind the ribs, you can rate the sheep on a scale of one to five, one being thinnest and five being fattest. At breeding time, ewes should score 2.5-3.5, depending on their breeding and environment.

Ewes that are too fat or too thin are less likely to conceive lambs or raise them successfully. After scoring their ewes, farmers might split them into different groups based on their condition and graze each group on particular pasture to adjust their weight. 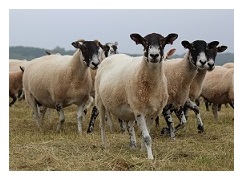 Some farmers might buy in ‘replacement’ ewes at this time of year. These are quite literally new ewes which replace any that have been lost or sent for meat at the end of their productive life over the previous year.

September is also the time to ‘MOT’ rams to make sure they’re in good shape to be let out with the ewes. Farmers will be looking for sound rams with good teeth and feet and firm testicles, and a body condition score of 3.5 to 4. Rams need slightly more fat than ewes ahead of mating – they have a lot of work to do!

It is common practice to separate the rams and ewes after six to eight weeks – long enough for the ewes to go through two oestrus cycles. Sheep carry their lambs for approximately 145 days. Here’s a handy way to remember the length of pregnancy in sheep: if the ram goes in with the ewes on bonfire night, the lambs will be born on 1st April – “In with a bang and out like fools!”

Just like human mothers when they are carrying a baby, ewes have a scan to look at the foetus and check progress. A contractor trained in scanning sheep will bring all the equipment to the farm and check each ewe individually. This happens 40-90 days into their potential pregnancy to see if they’re carrying lambs and establish their due dates. The aim on lowland farm is to have twins, as ewes have two teats on their udders so can rear two lambs. However, single births and triplets are common, and quads and quins not unheard of.

After scanning, ewes are usually split into groups according to how many lambs they are carrying. This allows the farmer to make sure the ewes are getting the right management and diet for their needs. For example, ewes having single lambs do not need as much energy as those carrying twins, so the two groups are kept on different feeding regimes. If a ewe is scanned and found not to be pregnant (referred to as barren), best practice is to sell her. Otherwise she will eat grass and feed for a whole year that a ewe with lambs will need instead. 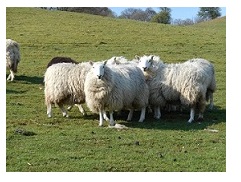 In the run up to lambing, farmers increase the nutrient density of the feed they are giving their ewes, often feeding more nuts or pellets (a concentrated high-nutrient feed) and less forage (hay and straw).  This is because the nutritional demands of the ewe rise rapidly prior to lambing, but the volume of food she can eat decreases. As the baby lambs grow inside her they push harder on the ewe’s rumen (part of her system of four stomachs), shrinking the amount of space available for digestion.

The last eight weeks before lambing are crucial, as this is when the majority of foetal growth occurs, the udder develops and colostrum is created. Colostrum is the thick, nutrient-rich first milk a ewe produces after giving birth and is vital for the healthy development of lambs. Colostrum also contains antibodies and provides lambs with protection against infection.

Throughout pregnancy, farmers will keep an eye on the condition of their ewes. Ewes which are too thin or too fat are more likely to lose their lambs or have difficulty at lambing. In February, farmers will be focusing on making sure they are meeting the nutritional needs of each group of ewes.

March and April are peak lambing time in the UK, although the main season runs from February to April and some farmers even lamb before Christmas. As the ewes in this example were tupped in October, they will lamb in March.

Lambing is a very busy time for farmers. Ewes don’t stop lambing when the sun goes down, so somebody needs to be on hand to keep an eye on them day and night. If a lamb is large or in a difficult position, the farmer or a helper sometimes needs to intervene and assist the ewe. The normal presentation of a lamb looks like it is diving – it should come out with both front feet pointing forward and its head resting between its forelegs. 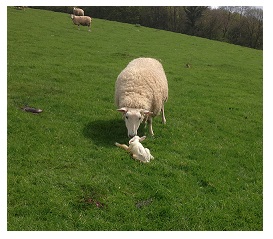 When a lamb is born, it is important that the sheep is left to nurse it in order to establish a bond between the ewe and the lamb. The umbilical cord is cut, and the lamb’s navel is dipped in iodine to prevent infection. If the farmer is lambing indoors, the ewe and her lambs are then placed in a small pen to help with this bonding process. It is vital that lambs receive colostrum early on, within the first two hours of life and again throughout their first 24 hours, in order to help them avoid disease and infection.  Not all ewes produce enough high-quality colostrum for their lambs, and where this is the case, farmers sometimes use bought-in colostrum. If the lambs have been born inside, the farmer will try and turn them out as soon as possible, as they are outdoor animals and thrive best in the fields. Depending on how healthy the lamb is and on the weather conditions, this can be as little as 12 hours after the lamb has been born.

During April the ewes and lambs are out in the fields pasture together, with the ewes grazing and the lambs initially suckling before moving on to a mixed diet of grass and milk. Lambs weigh roughly 2.5kg when they are born and grow incredibly quickly (around 300g a day when drinking lots of milk from their mothers). The farmer will continue to keep an eye on the condition of his ewes, as producing this much milk is demanding and it important to ensure ewes are receiving the correct nutrition. If there is not enough grass, supplement feeding will be offered to ensure the ewes keep supplying enough milk. Some farmers also offer extra feed to the lambs so, when they stop feeding on only milk from their mum (at about six weeks of age), they will grow fast on feed and grass. 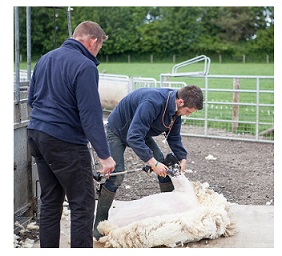 May marks the start of shearing season. Most farmers shear their sheep in late spring or early summer, when the weather turns warmer, to ensure sheep do not get too hot and start to attract flies.  The price farmers can get for their wool has dropped considerably over the decades and now brings in enough money to cover the cost of getting the sheep shorn, with very little (if any) profit left. The price for wool varies considerably between sheep breeds. For example, a Swaledale might get 42p/kg compared to a Romney at £1.40/kg. Click here for more info on wool and sheep shearing.

It is also time for the farmer to wean the lambs. By the time they are eight weeks old, lambs get more energy from grass than from milk. During weaning the lambs are separated from the ewes and turned out in pasture out of sight and earshot of them. The farmer will check the condition of his ewes again – they should score 2 to 2.5 at weaning. This is slightly lower than in September when the ewes were first checked, but they have worked very hard since then reared lambs and will have time to recover over the summer before the cycle begins again.

Over the summer, the lambs get bigger and fatter on grass.

Lambs intended for meat are generally sent for slaughter at five to eight months old. The lambs on our farm were born in March, so, depending on the weather and quality of grass over the summer, they may be ready to sell in August. Weights vary depending on which market a farmer is catering for, but 40kg is a ballpark weight that lambs reach before being sent for slaughter. 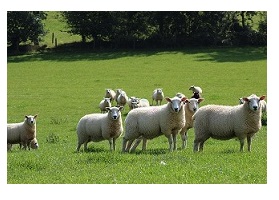 Some ewe lambs may be kept on the farm to provide replacements for older ewes and breed lambs of their own.

Lambs can be sold for meat by going to an auction market or being sold directly to a food processor, or being sold as store lambs. Store lambs are bought by another farmer who intends to get them to gain more weight and improve their condition before sending them to slaughter. The end product is delicious UK lamb, and the cycle can begin again. Go to the 'Meat and Wool' tab at the top of this page for delicious lamb recipes.