Despite uncertainties surrounding Brexit and the future of farming support, there were positive forward-looking discussions at the 2019 NSA Breed Society forum, hosted near Rugby, Warwickshire, in early May.

Attendees from NSA affiliated breed societies heard from a range of speakers covering everything from flock accreditation and its potential future role in the UK’s stratified system, to changes to the Signet programme, and British Wool’s forward plan. These discussions came alongside updates from NSA Head Office.

The afternoon session was an interactive workshop led by NSA Livestock Researcher, Nicola Noble, who gave an update on NSA’s work to help maintain the UK stratified sheep system, as well as an open discussion on accreditation schemes.

Mrs Noble comments: “Following NSA’s stratified sheep system meeting in early January, where it was agreed there was a need for some kind of health assurance for breeds moving down the hill, we thought it would be a sensible next step to consult with the UK’s wide variety of breed societies on this issue.”

As a result of this discussion, it was found that Johnes, maedi visna and enzootic abortion came out as the top three diseases of interest when buying in stock, closely followed by OPA, scab, scrapie and nematodes. Health assurance / accreditation schemes are available for some of these diseases, but there are issues with misconception of their value and uptake, and not all breed societies recognise these schemes.

Mrs Noble floated the idea of whether compulsory health schemes or even NSA accredited health schemes should be introduced to our sector, with the majority being in favour of more improved monitoring and potential rewards for farmers demonstrating proactive management when it comes to animal health and disease monitoring. As with all change, there is rightly concern over simplicity, practicability, uptake and acceptance in an industry where plenty of rules and regulations already exist.

Mrs Noble continues: “It would be better for organisations like ourselves and breed societies to encourage and promote good practice, rather than force another stipulation.”

The forum also gave NSA’s new Activities and Campaigns Officer, Chris Adamson, an opportunity to introduce himself. Mr Adamson comments: “NSA works closely with its affiliated breed societies, but I’m hoping to take that further and strengthen our relationships to benefit the wide range of members, all producing very different breeds across the country, but within one united sheep industry.”

Summary of the afternoon session (plus presentations to download below): -

Download the Breed Society Forum 2019 agenda here.
Download the presentations from Nicola Noble, NSA, and Alison Braddock, SRUC.
Download a summary of results from the afternoon interactive session.
Back to Event Reports 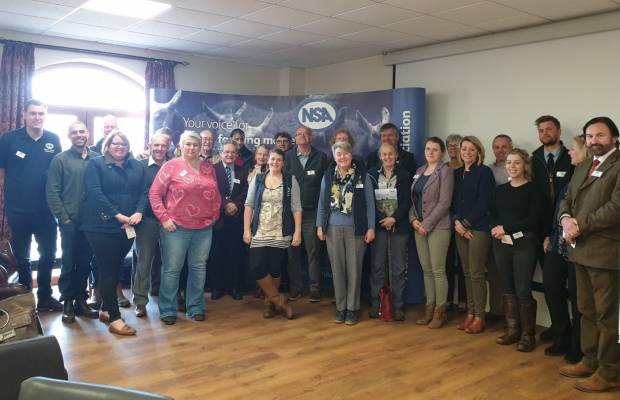 The Breed Society Forum was held in NSA Eastern Region this year.
National Sheep Association | The Sheep Centre | Malvern | Worcestershire | WR13 6PH
Tel: 01684 892661 Fax: 01684 892663
NSA is a Company Limited by Guarantee, registered in England (No. 37818). It is a registered charity in England and Wales (No. 249255) and in Scotland (No. SCO42853). NSA is VAT registered (No. 273 3469 44). NSA complies fully with the General data protection Regulation (GDPR). Contact NSA to request our privacy policy, to raise queries or concerns regarding GDPR, or to unsubscribe from NSA mailing lists. National Sheep Association is an organisation which represents the views and interests of sheep producers throughout the UK. NSA is funded by its membership of sheep farmers and it activities involve it in every aspect of the sheep industry.
your business your future