NSA Northern Region AGM round up

The T I Allinson Memorial Award presented by NSA Northern Region for lifetime achievement in the north of England was presented to Peter Lee, Morley Hill, Allendale.

From a young age Peter has shown a great knowledge and enthusiasm for livestock. In 1961, when a student at Kirkley Hall, he was awarded the prize for most improved student. He carried this enthusiasm forward into his working life. His extensive knowledge of the Swaledale and Blue Faced Liecester bloodlines has resulted in Morley Hill stock being prize winners at livestock auctions throughout the north of England.

Peter's enthusiasm for the North of England Mule is unparalleled. Since the formation of NEMSA (North of Enland Mule Sheep Association) in 1980, of which Peter was one of the original members, he has worked tirelessly to promote the breed. Peter has been a past chairman of NEMSA Lazonby Branch and also a past chairman of the Swaledale Sheep Breeders Association D District. He has personally transported sheep to shows and exhibitions in such far away places as Cornwall, Dingwall, Brighton and Fraserborough. Peter has initiated Mule classes at The Royal Highland Show, he even provided a winners trophy. Not satisfied with his promotional work during summer and autumn seasons he has supported and encouraged new classes at the RHS Winter Fair.

Peter is held in high regard and has great respect from all NEMSA members and is seen as an ambassador for the Mule sheep breed.

Adam Watson presented Peter with a Border Fine Art Figurine to commemorate his receiving of the award.

After the AGM David Raine and Phil Stocker gave a presentation and talk on their trip to New Zealand last year and Thomas Carrick and James Raine from Cumbria gave a report on their NSA northern region sponsored young person’s attendance at the Northern Farming Conference. 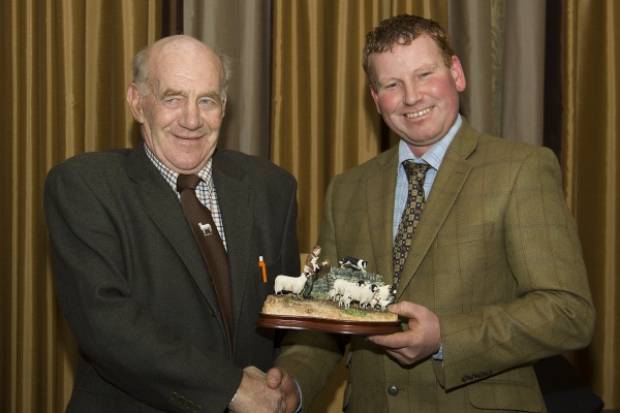 Chairman Adam Watson presents Peter Lee with the T I Allinson Memorial Award for lifetime achievement in the north of England
National Sheep Association | The Sheep Centre | Malvern | Worcestershire | WR13 6PH
Tel: 01684 892661 Fax: 01684 892663
NSA is a Company Limited by Guarantee, registered in England (No. 37818). It is a registered charity in England and Wales (No. 249255) and in Scotland (No. SCO42853). NSA is VAT registered (No. 273 3469 44). NSA complies fully with the General data protection Regulation (GDPR). Contact NSA to request our privacy policy, to raise queries or concerns regarding GDPR, or to unsubscribe from NSA mailing lists. National Sheep Association is an organisation which represents the views and interests of sheep producers throughout the UK. NSA is funded by its membership of sheep farmers and it activities involve it in every aspect of the sheep industry.
your business your future