The National Sheep Association (NSA) welcomed young sheep farmers from across the UK to its annual Next Generation winter conferences last week.

For the first time since the launch of the NSA Next Generation programme, an initiative that aims to support the future of the UK sheep industry by encouraging young sheep farmers of the future, the conferences were held at two venues allowing an increased number of young sheep enthusiasts to take part in the free informative, networking events.

The first of the events was held at Sedgemoor Livestock market, Somerset, with the second at Junction 36 Rural Auction Centre, Cumbria, with approximately 100 young farmers and students joining together across the two venues.

Speakers from NSA Next Generation’s own successful Ambassador project were joined by industry experts including local sheep vets, land agents, the Moredun research institute and representatives from the Farming Community Network (FCN) to highlight to attendees the importance of looking after themselves, as well as their sheep.

Helping to bring the conferences together, NSA Communications Officer Katie James comments: “ The NSA Next Generation Winter Conference is always a popular event and this year was no exception with young farmers and students joining us from far afield. As always, we were very lucky to be joined by some excellent speakers offering targeted advice for those younger people involved in the industry as well as NSA Next Generation Ambassadors delivering information to attendees on how they add value to their farming enterprises in different ways.”

The annual winter conference is just one component of the ever-growing number of activities offered by NSA Next Generation. This year has seen new additions to the programme including a travel bursary and a future trip to Westminster for those interested in agricultural policy. The programme is funded entirely by NSA, NSA regions and NSA ram sales and events such as those held last week are done so with the wider support of the agricultural sector.

Mrs James continues: “Thanks must go to all of our speakers at last week’s conferences, without whom events such as these could not happen. Thanks, should also go to all the young people who joined us for the enthusiasm shown at both of the events. Most of those joining us at the events are just starting out in their careers at a time of uncertainty for the industry but despite this, they were motivated and confident of a successful future in their chosen career as shepherds or as those working in the allied industries. This positivity is exactly what is needed at this time.” 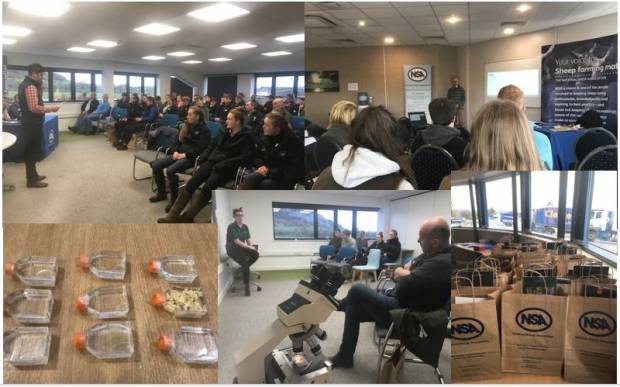