Having expected to show off their shepherding skills in a typical way with tasks such as sheep shearing and ATV handling at the national finals of the National Sheep Association (NSA) Next Generation Shepherds competition last year, a group of enthusiastic young sheep farmers have demonstrated their enthusiasm and adaptability to finally complete the competition, but in a way that none of them had expected!

With ongoing Covid-19 restrictions preventing the bringing together of the young shepherds from all nations of the UK the competition was moved online with the finalists tasked with showing off their video and online media skills in addition to shepherding to compete for the title of NSA Next Generation Shepherd of the Year.

Emerging as both the victor of the Under 21 title and overall NSA Next Generation Shepherd of the Year was 19 year old Harry Lyons from Cheshire. Harry, who represented NSA Central Region in the competition is a student at Reaseheath College, Cheshire, studying a Level 3 Extended National Diploma in Agriculture and has his own flock of pedigree Suffolk sheep. Harry wins prize money of £1000 kindly donated by competition sponsors the Texel Sheep Society and a crystal bowl presented by NSA as a memento of his win.

Competition organiser Helen Roberts comments: “Congratulations to all the competitors and of course Harry in being named as the overall competition winner. In what has been very different and difficult circumstances the young shepherds have taken time out and shown a commendable effort to complete this competition and all at NSA extend thanks to them for that. Thanks, of course, also go to the Texel Sheep Society for their continued support of this competition and our experienced competition judging team.

“All involved with the contest agree that the competition has shown the UK has some very talented and knowledgeable young sheep farmers who are a true credit to themselves and the wider sheep sector moving forward.”

NSA was pleased to be joined by well know industry experts to assist with the judging of the competition elements that were all completed via video recording or online assessment. Judges included UK levy board representatives, independent sheep consultants, commercial company advisers and NSA staff themselves. Competition elements included an animal health quiz and practical demonstration, ATV handling demonstration, carcase judging and a plan for online promotion of Love Lamb Week 2021, the annual levy board led campaign that takes place each September to promote the consumption of UK produced lamb. NSA Communications Officer, Katie James, who helped judge the Love Lamb task comments: “The ideas and standard of entry for this task were outstanding. In a competition that ultimately seeks to find the best practical shepherd this task could have been out of the competitors’ comfort zone but this was not the case. The entries impressed so much that it is now hoped that some of the content from this element will be used in this year’s Love Lamb campaign that will begin on the 1st September.”

Those interested in competing in regional heats to qualify for the 2022 finals of the competition at next year’s NSA Sheep Event will find details of upcoming regional competitions on the NSA website, including NSA Marches Region who are looking forward to welcoming competitors to their event on Sunday 4th July at Overbury estate, Gloucestershire and NSA South East Region in conjunction with the Southern Shears event on Saturday 17th July. It is hoped further regional heats will take place later in the summer and through to the Autumn this year. 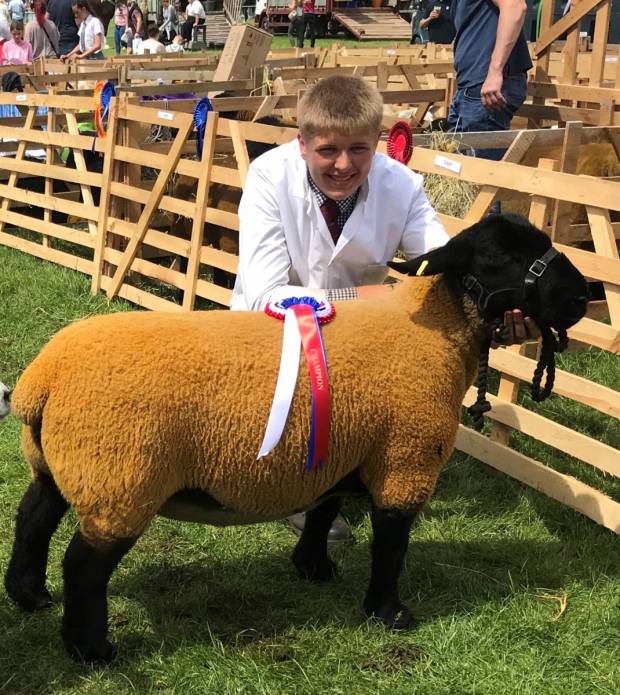 Harry Lyons impressed judges to scoop both the overall title and best under 21 award.
National Sheep Association | The Sheep Centre | Malvern | Worcestershire | WR13 6PH
Tel: 01684 892661 Fax: 01684 892663
NSA is a Company Limited by Guarantee, registered in England (No. 37818). It is a registered charity in England and Wales (No. 249255) and in Scotland (No. SCO42853). NSA is VAT registered (No. 273 3469 44). NSA complies fully with the General data protection Regulation (GDPR). Contact NSA to request our privacy policy, to raise queries or concerns regarding GDPR, or to unsubscribe from NSA mailing lists. National Sheep Association is an organisation which represents the views and interests of sheep producers throughout the UK. NSA is funded by its membership of sheep farmers and it activities involve it in every aspect of the sheep industry.
your business your future