Joyce is the choice to open NSA Highland Sheep at Kinnahaird

Scotland’s 2015 Sheep Farmer of the Year and vocal advocate for the Scottish sheep industry, Joyce Campbell, who runs a flock of 780 Lairg-type North Country Cheviot ewes on her 5,600-acre hill farm in Sutherland, will officially open NSA Highland Sheep 2017 at Kinnahaird Farm, Contin, Strathpeffer, Ross-shire, on Wednesday, May 31.

Scotland’s main event for the sheep industry this year is being hosted by farmer Mrs Dorothy Clark and her daughter Amy Grant. It is the third of what has become a biennial event in one of the most important sheep areas of Scotland.

The sheep industry is worth £242 million to Scotland’s economy, representing 8% of agricultural output and Scottish sheep farmers rear more than three million lambs a year.

The focus of NSA Highland Sheep will be on the major challenges which the industry faces to improve efficiency of production, marketing and processing. A recent report commissioned by the Scottish Government suggested that the income of the industry could be boosted by £26 million by addressing these issues.

“We are delighted that Joyce has accepted our invitation to perform the official opening ceremony at NSA Highland Sheep,” said Brenda Macintyre, chair of the local organising committee which is arranging the event on behalf of NSA Scotland.

“Joyce has emerged as an inspiring champion of the Scottish sheep industry since becoming the first winner of the Sheep Farmer of the Year title in 2015 and her strong advocacy of the industry is an example to us all.”

Sheep farmers from all over the Highlands and Islands – and further afield - will be making their way to NSA Highland Sheep to enjoy all that the event has to offer, including a farm tour, demonstrations, competitions, seminars and much else, but, equally, to catch up with the latest political and technical developments in the industry at a time when the future has never been more uncertain.

The wide disparity in the physical and financial performance of sheep flocks is a key issue in the industry and improving efficiency will be the major focus of NSA Highland Sheep where the host farm has been working closely with major sponsor Harbro Ltd to improve the performance of the farm’s 400-strong flock of North Country Cheviot x Texel and Texel cross ewes by the adoption of improved genetics and nutrition.

A panel of top industry figures will also address these issues in the seminar programme which will cover some of the practical problems facing sheep farmers, such as health and welfare and lameness in sheep, as well as marketing and the likely impact of Brexit.

The event has attracted more than 80 commercial and educational stands and 25 sheep breeds and individual breeder stands. Other features will include a farm tour by tractor and trailer with grass seed trials and demonstrations on CT scanning, shearing and wool handling, wool spinning, sheep dressing, crook making, butchery and cookery. There will also be an invitational sheep dog trial and stockjudging competitions, farmers market and craft stalls.

The day will end with a show and sale of ewe hoggs which will be judged by Robert Paterson, Jun, Upper Auchenlay, Dunblane.

In addition to Harbro, mainline sponsors include Caltech Crystalyx, MSD Animal Health, BWMB/CfW, Dingwall and Highland Marts and Shearwell Data, with considerable support being given by Quality Meat Scotland (QMS). 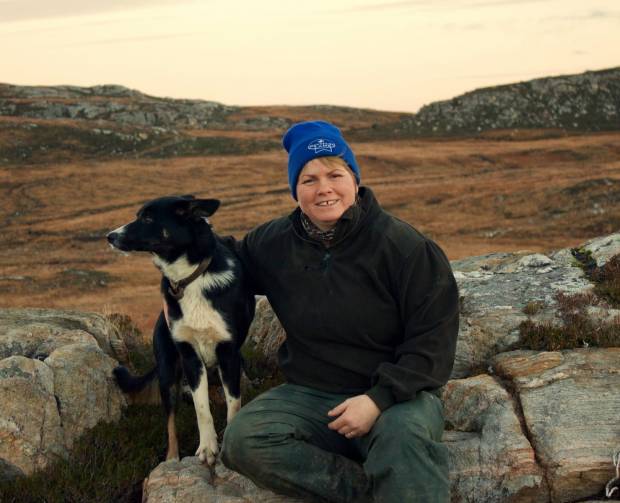 Scotland's Sheep Farmer of the Year 2015 Joyce Campbell
National Sheep Association | The Sheep Centre | Malvern | Worcestershire | WR13 6PH
Tel: 01684 892661 Fax: 01684 892663
NSA is a Company Limited by Guarantee, registered in England (No. 37818). It is a registered charity in England and Wales (No. 249255) and in Scotland (No. SCO42853). NSA is VAT registered (No. 273 3469 44). NSA complies fully with the General data protection Regulation (GDPR). Contact NSA to request our privacy policy, to raise queries or concerns regarding GDPR, or to unsubscribe from NSA mailing lists. National Sheep Association is an organisation which represents the views and interests of sheep producers throughout the UK. NSA is funded by its membership of sheep farmers and it activities involve it in every aspect of the sheep industry.
your business your future