NSA ready to #LeadOn the fight against sheep worrying by dogs

With the devastating issue of sheep worrying by dogs continuing to affect sheep farmers and their flocks across the UK the National Sheep Association (NSA) is preparing to launch its latest campaign to raise awareness of the problem.

Traditionally NSA has held a week long campaign each Spring highlighting the subject of sheep worrying by dogs running alongside its year-round work to tackle the problem. But with cases increasing at an alarming rate the sheep farming charity will run a series of online activity over an extended period of two weeks this year in an effort to have a greater impact on the important messaging of responsible dog ownership needed to protect sheep flocks.

NSA will launch its 2021 campaign, titled #LeadOn, on Friday 30th April by releasing the latest results from its farmers' survey. The survey has broken all previous NSA survey records for the number of respondents sharing their experiences of attacks on their flocks during the past year, an early indication of the shocking scale of the problem.

NSA Chief Executive Phil Stocker comments: “Sheep farmers across the UK have suffered an increase in sheep worrying attacks by dogs over the past year, as dog ownership has increased and walking in the countryside has become one of the few activities to be enjoyed during lockdown – but dog owners must be responsible for their pet.

“NSA is committed to ensuring the general public develops a better understanding of the stress and suffering that any dog, no matter its breed, can cause to sheep by barking, chasing and attacking them. It is a serious animal welfare issue that puts both sheep and much loved pets at risk”

The two-week long campaign will include social media activity, webinars, workshops and new online case studies and content on the NSA website to help both sheep farmers in reducing the risk of attacks happening on farm and the general public in preventing their dogs from being involved in sheep worrying attacks.

It is hoped the campaign hashtag #LeadOn will be recognised as an encouragement to dog owners to be responsible and act as an example to others by keeping their pets on leads in the presence of livestock.

Sheep farmers are urged to use the simple but effective hashtag message in their own social media posts as part of a series of online calls to action released by NSA on how the sheep sector can get involved during the two weeks and beyond. NSA is encouraging sheep farmers to:

Well known for its high quality informative online activity NSA is also encouraging farmers to join its Breakfast Club webinar on Wednesday 5th May that will provide an early morning focus on the current and future legislation surrounding sheep worrying by dogs. The webinar will begin at 8.30am. Further details on this and the campaign workshops are available on the NSA website at www.nationalsheep.org.uk/events

General information on the topic of sheep worrying by dogs can also be found at www.sheepworrying.org.uk. In addition, NSA has also produced a range of graphics for farmers and other supporters to display and share demonstrating support for the NSA campaign. To receive a copy of these graphics please email [email protected] 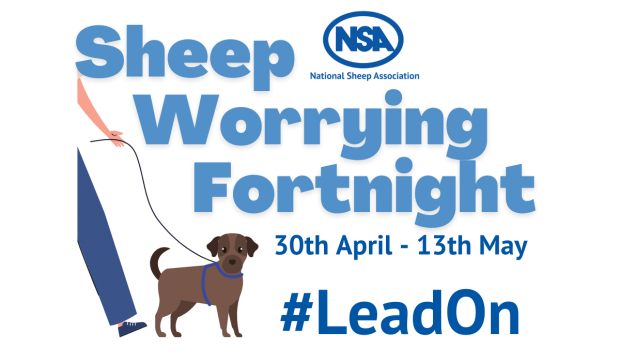