Around 75 young people in the sheep sector came together yesterday (Wednesday 12th November) for an ‘Inspiring the Next Generation’ conference and farm walk near Cirencester, Gloucestershire,

The one-day event marked the culmination of the first year of the NSA Next Generation Ambassador Programme, which has seen 11 ambitious young sheep farmers from around the UK come together for a series of personal development and sheep skills delivery sessions. The Ambassadors each spoke at the conference, describing their own businesses and the positive changes they have made as a direct result of the being part of NSA Next Generation activity. The conference also saw the application window for the 2015 Ambassador Programme open, with up to 12 places on offer.

Joanne Briggs oversees the NSA Next Generation programme on behalf of NSA. She says: “The conference was a huge success for a variety of reasons – we had a great turn out of young people genuinely interested in getting ahead in the sheep sector, the 2014 Ambassadors demonstrated the progress they’ve made in their business over the past 12 months, and there was a great deal of interest about next year’s programme.”

The event, which was jointly run by NSA Next Generation and RASE Innovation in Agriculture, also involved five guest speakers presenting different routes into the sheep sector. Marc Jones, a sheep farmer from Powys, spoke about taking on a family farm; Kevin Harrison from Gloucestershire shared his experiences as an employed shepherd; Andrew Foulds from Norfolk described how he has built up an extensive sheep system entirely on rented land and short keep arrangements; Eileen McCloskey of CAFRE in Northern Ireland looked at career options in the farming support sector; and David Coates from North Yorkshire outlined his share farming set-up.

Mrs Briggs continues: “Despite having a range of different systems, all the speakers agreed that their successes came from taking every opportunity that came their way. They all spoke enthusiastically about seizing chances and learning from the good experiences and the bad. NSA Next Generation is just one programme out there offering and encouraging opportunities and I hope many young people with a passion for the sheep sector will consider applying for the 2015 Ambassador programme. I also look forward to continuing to work with the 2014 Ambassadors as they maintain their links with NSA and grow into the sheep farming leaders of the future.”

The NSA Next Generation Ambassador Programme is open to anyone aged 18-35 on 31st December 2014. Find more information and an application form and meet this year’s ambassadors atwww.nationalsheep.org.uk/nextgeneration/ambassador-group. 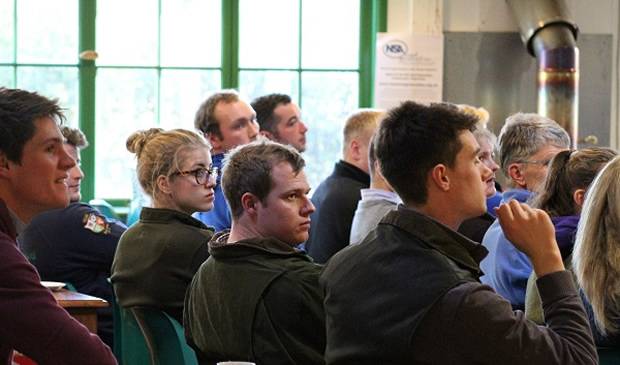 Almost 80 young people came together at the 'Inspiring the Next Generation' conference
National Sheep Association | The Sheep Centre | Malvern | Worcestershire | WR13 6PH
Tel: 01684 892661 Fax: 01684 892663
NSA is a Company Limited by Guarantee, registered in England (No. 37818). It is a registered charity in England and Wales (No. 249255) and in Scotland (No. SCO42853). NSA is VAT registered (No. 273 3469 44). NSA complies fully with the General data protection Regulation (GDPR). Contact NSA to request our privacy policy, to raise queries or concerns regarding GDPR, or to unsubscribe from NSA mailing lists. National Sheep Association is an organisation which represents the views and interests of sheep producers throughout the UK. NSA is funded by its membership of sheep farmers and it activities involve it in every aspect of the sheep industry.
your business your future