There was plenty of cause for celebration among the UK competitors in the World Young Shepherds Challenge in France on Wednesday. England took top prize in the team and senior individual sections of the competition, which saw 31 young hopefuls from 16 nations put through their shepherding paces.

A winning performance by Sam Bullingham of Okehampton, Devon, in the over-21 contest put England on track for team glory and earned him the individual title. Fifth place for team-mate Richard Carter, from Gloucestershire, secured England’s place at the top of the leader board.

Sam says: “I wasn’t expecting to win, so I’m really pleased! The Young Shepherds World Challenge has been a great experience. I think meeting the other competitors from around the world is the biggest thing I’ll take away from it. It’s not really an opportunity you get in any other situation – one minute you’ll be talking to a Hungarian about his grazing plan, the next you’ll be comparing notes with an American.”

It was a good day too for the other home nations, with all four UK teams finishing in the top seven. Northern Ireland took second place, thanks to strong performances from Jonathan McKelvey and Adam Crockett, who finished in fourth and sixth place individually. Second place in the individual contest for Rhydian Thomas combined with Guto Roberts’ fourth in the 21 and under section won Wales fourth place. Scotland’s young team of Euan Orr and David McClean earned their country seventh place with third and seventh place respectively in the 21 and under section.

The World Young Shepherds Challenge marks the culmination of the National Sheep Association (NSA) Young Shepherd of the Year Competition. All eight UK contestants for the world final were selected through the regional rounds of the NSA competition, held at NSA events over the past two years. The two highest placed native contestants in the Scottish, Welsh and Northern Irish contests earned places in the World Challenge, while the two best placed English competitors in the national final at NSA Sheep Event were chosen to go forward.

NSA Young Shepherd of the Year Competition national final organiser Helen Davies says: “The UK competitors at the World Young Shepherds Challenge have done brilliantly, and it just goes to show the strength of talent we have coming into sheep farming across the UK. The number and quality of young people getting involved in the sheep sector reflects the great opportunities sheep farming offers. NSA is delighted to run the NSA Young Shepherd of the Year Competition and provide the chance for young people to test their skills against others from around the country and around the world. Our thanks also go to Rappa, Eblex and the NSA regional committees for providing the finances for our competitors to travel to France.”

This is the second time the World Young Shepherds Challenge has been held, and the second victory for team England. This year’s contest was held in the Auvergne region of France, with Brioude Bonnefont Agricultural College and the Sommet de l’Elevage Show playing host. The final took place over Tuesday and Wednesday. Contestants were required to complete a written test and a series of practical tasks, including sorting ewes, hoof trimming, ewe body condition scoring, assessing lamb weights, handling, shearing and quad-bike driving.

As well as being put through their competitive paces, the contestants have also enjoyed visits to sheep farms, sightseeing in Paris, sporting activities in the Auvergne Volcano Park, and a visit to the Sommet de l’Elevage Show itself during their time in France. They participated in an international conference on sheep production and next generation sheep farmers on Tuesday night. On Friday they are visiting Rayon de Roquefort to see the famous cheese in production, before returning to the UK on Saturday.

For further information and high resolution images please contact Caitlin Peck, NSA Communications Officer, on 01684 892661 or [email protected].
The National Sheep Association is an organisation that represents the views and interests of sheep producers throughout the UK. It is funded by its membership of sheep farmers and its activities involve it in every aspect of the sheep industry. More at www.nationalsheep.org.uk and www.nsanextgeneration.org.uk. 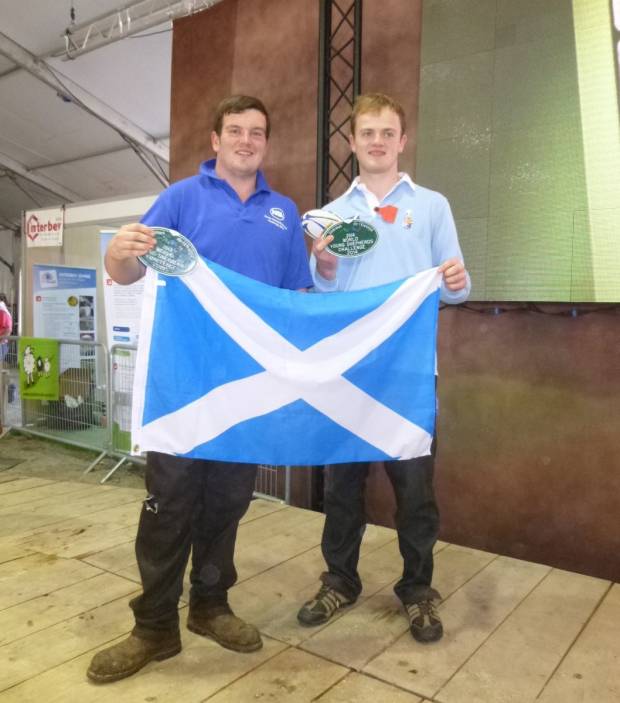 Team Scotland: David McClean (left) and Euan Orr (right)
National Sheep Association | The Sheep Centre | Malvern | Worcestershire | WR13 6PH
Tel: 01684 892661 Fax: 01684 892663
NSA is a Company Limited by Guarantee, registered in England (No. 37818). It is a registered charity in England and Wales (No. 249255) and in Scotland (No. SCO42853). NSA is VAT registered (No. 273 3469 44). NSA complies fully with the General data protection Regulation (GDPR). Contact NSA to request our privacy policy, to raise queries or concerns regarding GDPR, or to unsubscribe from NSA mailing lists. National Sheep Association is an organisation which represents the views and interests of sheep producers throughout the UK. NSA is funded by its membership of sheep farmers and it activities involve it in every aspect of the sheep industry.
your business your future