The issue of sheep-worrying by dogs seems to have increased a lot for us in the last few years. We have around 50 breeding ewes - pedigree Charollais and Jacobs - and over winter we also have up to 800 store lambs.

We farm not far from Manchester Airport in a fairly built up area and most of our fields have busy footpaths through them. When incidents happen, if we are informed and manage to get to the field while the dog is still there, the owners are generally horrified. But a few times we have had aggression from owners when challenged about their dog’s behaviour. Mark has been physically assaulted on one occasion.

We do our utmost not to shoot offending dogs and see it as really the last resort, but unfortunately we have had to shoot them in the past. The last dog we had to shoot was a Husky-type dog whose owner was three fields away with her other dogs. The dog would not be distracted from the sheep and was aggressive towards us. It killed nine lambs outright and numerous others had to be stitched up and treated or put down by the vet.

This winter things reached a new level. We had several sheep killed or maimed in one particular field. We were finding them literally torn apart with witnesses describing different dogs carrying out attacks. In these attacks it would be very surprising if the owners of the dog(s) did not know their dog had attacked something - they must have been covered in blood. It makes us very angry that they can walk away knowing an animal may be injured and making a conscious decision not to check or report it to us.

On one occasion, unfortunately witnessed by two very distressed 10-year-old girls, the dog tore a large part of the sheep’s face and jaw bone out before running back to its owners. They walked off without investigating, as far as they knew leaving that poor sheep to suffer from its horrendous injuries. On another occasion it was two Staffordshire Bull Terriers literally playing tug-of-war with a sheep. These dogs were being walked by a dog walker with four other dogs. Both these sheep had to be destroyed due to the severity of their injuries.

We have had various responses from police over the years from total disregard to interested-but-not-urgent. However, when you are watching a dog tear up your stock or have an irate owner trying to walk away with the offending dog you need them to treat it urgently or at least seriously. Things are improving though and the police are wising up to the issue. Our problem here is that we are on the border of two forces - Manchester and Cheshire - and they will pass it onto one of the other forces if they consider it is just out of their area, and this loses time.

We have had so many members of the public saying 'he's only playing; he wouldn't hurt them'. People are simply not aware that merely chasing the sheep is harmful to them. It does harm them - they are chased into ditches and drown; they die of shock and stress, hours or days later; ewes abort their lambs; they twist their limbs and go lame. The most common injury we seem to find is whole or part ears torn off as the 'playful' dog grabs at the sheep.

The worst attitude we have seen was actually from the owner of a local boarding kennel who's defense was 'it's only a sheep' when his own dog was finally tracked down after repeatedly escaping and chasing our ewe flock.

It is so important that the public become aware that a dog does not have to bite to harm the sheep. Yes it is true that most sheep will eventually be slaughtered for meat, but while they are alive they deserve to be treated with respect and care.

We contact the local press when it happens, and use Facebook to get the message out to dog owners and professional dog walkers. We have recently resorted to putting up posters with graphic images of the injuries that dogs have inflicted on our sheep on the field gates in the hope of shocking people into awareness. Also these posters provide contact details for us should people witness attacks or find injured sheep - this has proved very useful.” 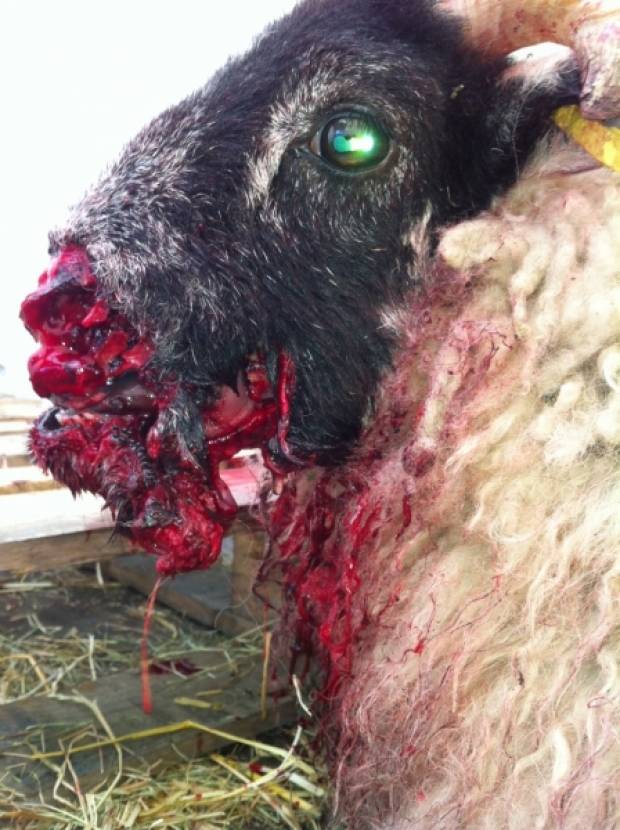